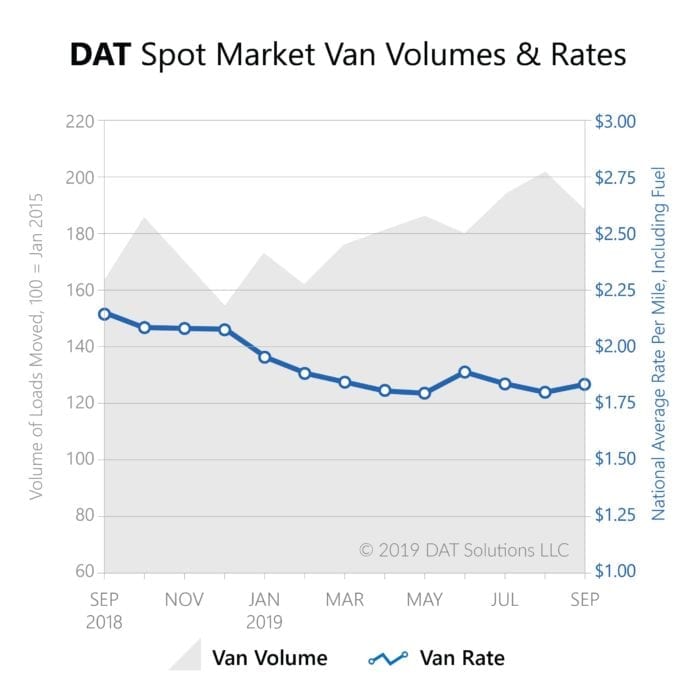 Van rates averaged $1.84 per mile in September, up 4 cents from the prior month and 30 cents below September 2018, when the rate was exceptionally high. Van volume fell 6.9 percent from August but tighter capacity and weather kept rates on solid footing. (Courtesy: DAT SOLUTIONS)

Volumes for dry van, refrigerated and flatbed freight declined from their August peaks but were higher than September 2018 numbers, according to the DAT Truckload Freight Volume Index. The index reflects changes in the actual number of spot market loads moved each month.

Hurricane Dorian disrupted supply chains early in the month, with the spot market kicking into action for resupply and recovery efforts along the Southeast coast. Flooding along the Gulf Coast after Tropical Storm Imelda stalled freight movements later in the month.

Meantime, fall harvests and retail shipments spurred by Halloween kept trucks in high demand, and the close of the third quarter led to a spike in activity to end the month.

Van rates averaged $1.84 per mile in September, up 4 cents from the prior month average. The average rate was 30 cents below the high prices of September 2018. Van volume fell 6.9 percent from August, but compared to last year, September van volume rose 15 percent.

Fall produce harvests pushed reefer load counts 10 percent higher than they were in September 2018, despite the 7.6 percent decline from last month’s peak demand. Nationally, reefer rates averaged $2.16 per mile in September, a 2-cent increase over August but a 35-cent drop from September 2018.

Flatbed markets have lagged in 2019 but spot market prices began to stabilize last month. The national average stayed at $2.19 per mile, the same as August, but 32 cents below the high rates from September 2018. Flatbed volume declined 8.2 percent compared to August but load counts remained 14 percent above where they were last year.

“The spot market gained a lot of momentum heading into quarter four,” Dorf said. “We expect demand to remain elevated through the rest of the year, and the holiday shipping season should push van rate higher than we saw in quarter three.”