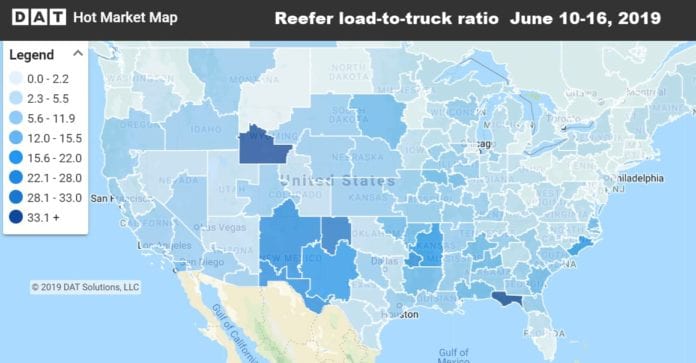 PORTLAND, Ore. — The number of truck posts on the spot truckload freight market jumped 14% during the week ending June 16, said DAT Solutions, which operates the industry’s largest load board network.

The increase is in line with expectations following CVSA’s International Roadcheck, the annual enforcement initiative, which tends to have a dampening effect on available capacity.

With the number of load posts down 10% last week, load-to-truck ratios declined for all three equipment types.

Still, national average spot rates were above May averages, and van and refrigerated freight volumes were each up nearly 20% compared to the previous week.

The national average van load-to-truck ratio dipped from 3.8 to 3.0 and rates were lower on 61 of the top 100 van lanes by volume. However, several major van markets including Los Angeles, Dallas, Atlanta, and Chicago were up significantly in terms of available loads.

Demand was strong in the Southeast and West. The average outbound van rate from Memphis, Tennessee, was up 8 cents to $2.33/mile, as was Los Angeles at $2.31/mile. Van lanes with gains included:

It’s almost always good news when rates rise in both directions on lanes in the same region of the country, as they did on a handful of van lanes that connect Memphis, Charlotte, North Carolina, and Atlanta. Memphis to Charlotte paid $2.16/mile, up 6 cents, and Charlotte to Memphis paid $1.65, up 3 cents, for a roundtrip average of $1.91/mile. That’s up 9 cents compared to the previous week.

Even when rates dropped in one direction, the roundtrips improved over the previous week’s averages. Memphis to Atlanta went for $2.50, up 10 cents, but Atlanta to Memphis paid $1.86/mile, down 3 cents. The roundtrip average was $2.18, up 7 cents compared to the previous week.

While the national average reefer load-to-truck ratio dropped from 6.4 to 4.5, volumes increased out of both California and Texas, signs that produce season is on. Average outbound reefer rates were higher in Sacramento, California ($2.76/mile), Ontario, California, ($2.80/mile), and Fresno, California ($2.46/mile) — three of the top four California markets (Los Angeles fell 2 cents to $2.93/mile).

Freight volumes were up more than 40% out of Nogales, Arizona, on the Mexico border. The largest reefer lane-rate increase was Nogales to Dallas, up 49 cents to $3.36/mile.