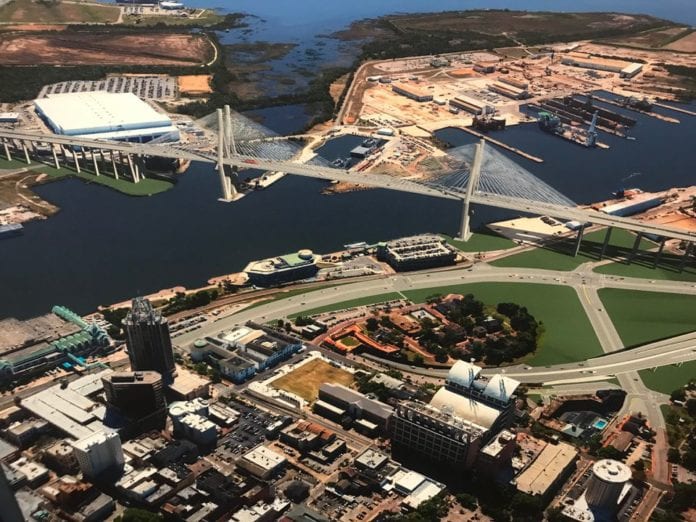 A proposed toll bridge on Interstate 10 across Mobile Bay and Mobile River was estimated to cost $6 each way. This would be one of the nation’s largest infrastructure projects at over 10 miles in length and suspended hundreds of feet in the air above the water near downtown Mobile. It would cost $2.1 billion. The Alabama governor has declared the project dead, but many fear it might show up again in the future. (Courtesy: ALABAMA DEPARTMENT OF TRANSPORTATION)

RICHMOND, Va. — The Alliance for Toll-Free Interstates (ATFI) has published its periodical update on current and prospective tolls efforts.

Reports on eight states and the federal government are included in the update.

The ATFI says it is committed to keeping existing interstates toll-free and open “as they were intended.”

The following information is taken directly from the update.

A proposed toll bridge on Interstate 10 across Mobile Bay and Mobile River estimated at $6 each way for vehicles has been getting a lot of attention lately. This would be one of the nation’s largest infrastructure projects at over 10 miles in length and suspended hundreds of feet in the air above the water near downtown Mobile. While the bridge is badly needed, transportation officials claim the state can’t afford this massive $2.1 billion project on its own. The hotly contested proposal has enormous public opposition and even state officials have failed to reach a consensus. Despite Gov. Kay Iver’s outspoken support, Lt. Gov. Will Ainsworth voiced his opposition, calling it a burden on the region’s working families.  At the end of August, Ivey declared this plan dead after the Eastern Shore Metropolitan Planning Organization voted to eliminate it from its short-term plan. However, many residents fear that this tolling project might show up again in the near future.

Connecticut is undergoing a heavy battle on funding its Special Transportation Fund. At the start of the 2019 Connecticut General Assembly Session, Gov. Ned Lamont went back on his campaign promises to not toll cars in the state by proposing to establish electronic tolls across the state. There are claims that tolls could raise $800 million annually, and as much as 40% of revenues could come from out-of-state travelers. However, information from the governor’s office has not been consistent by constantly changing details about the number, location and rates of the tolls. Republican legislators have offered a counterproposal named Prioritize Progress, which would steer clear of tolls. Lamont intends to call a special session on tolls before the 2020 regular session, but it has not been scheduled at this time.

In the spring, Gov. Ron DeSantis signed a bill from the Florida House creating three new toll roads in western and central Florida, including Orlando. No studies have been completed that address whether the toll roads are needed, and basic questions about the projects are set to be figured out at a later time. The Florida Department of Transportation (FDOT) will manage the projects and have final say over whether the roads become reality. At the end of July, FDOT set up a website for public comments on these three toll projects. To learn more, visit www.FloridaMCores.com.

New York City became the first American city to impose congestion pricing to alleviate traffic and raise money for other transportation needs in the spring. Beginning in 2021, motorists will have to pay to enter the heart of Manhattan.  The Triborough Bridge and Tunnel Authority, which is a piece of the Metropolitan Transportation Authority, will decide how to implement congestion pricing after hearing to reflect on public comments and the findings of a traffic study.

South Carolina rejected tolls on existing interstates this year. At the request of the legislature, the South Carolina Department of Transportation (SCDOT) completed a study recently about turning Interstate 95 into a toll road. The comprehensive study examined how much it would cost to build the tollbooths and how long it would take the state to complete the project. The 199-mile stretch of I-95 would be separated into four points where a toll would be charged to cross each of four bridges. SCDOT found it would take the state 35 years to produce the money to pay for the project and cost an estimated $3.5 billion.

In December 2018, the state announced that it would begin construction on the next 10 truck-only toll gantries on I-95. Despite opposition from major trucking groups and a lawsuit from the American Trucking Associations, the first toll booths opened in June 2018. In March 2019, the lawsuit from the ATA challenging Rhode Island’s truck-only tolls was dismissed by a federal judge who said the case needs to be tried at the state level. In early April, ATA appealed a federal judge’s ruling to dismiss the group’s lawsuit. Moreover, state officials say drivers crossing Rhode Island’s Newport Pell Bridge have tallied up $9.6 million in unpaid tolls, fees, and fines throughout the last six years.

During the 2019 Virginia General Assembly Session, legislators considered several bills to toll Interstate 81 (I-81). ATFI partnered with the Virginia Trucking Association, Virginia Manufacturers Association, Virginia Forest Products Association, and several other trade associations to oppose the toll proposals. After the legislation was defeated, the General Assembly adopted a series of sales and gas tax increases and higher fees to fund improvements to I-81. This was a huge victory and complete reversal from the Virginia Governor Ralph Northam’s original plan for tolls in January. His message was clear: Virginia rejects tolls on existing interstates.

In July, Governor Tony Evers signed the two-year state budget while using his line-item veto power to eliminate of several provisions. Most notably was a $2.5 million Department of Transportation study on mileage based fees and tolling that he deleted. Governor Evers vetoed this provision, saying: “I am vetoing this section because I object to the financing of another study that will show, yet again, that the motor fuel tax is the most effective way to approximate a user fee of roadway use and the most cost-effective way to collect revenue. The Legislature has had more than enough evidence and enough time to study the issue. It is time for the Legislature to stop stalling and act to secure a long-term transportation funding solution.”

The United States Senate released the Investing in America’s Surface Transportation Infrastructure (IATA) Act, a comprehensive surface transportation reauthorization bill, which would expire in September 2020. The tolling highlights include a pilot program mentioned as the Congestion Relief Program. On September 11, the House Highways and Transit subcommittee held a hearing called “Pricing and Technology Strategies to Address Congestion on and Financing of America’s Roads.” Elected officials and six witnesses discussed whether tolling, congestion pricing or even a fuel tax is the best way to resolve congestion across the country. Darren D. Hawkins, CEO of YRC Worldwide Inc., spoke out against tolling existing interstates on behalf of the American Trucking Associations.

The ATFI said it would continue to monitor tolling efforts.