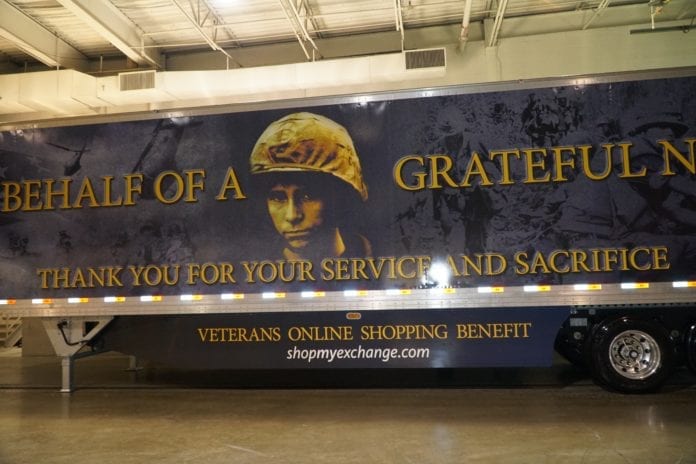 For the second year in a row, the Exchange created a custom truck design that appears on three of the Department of Defense retailer’s tractor-trailers that deliver merchandise across the United States.

The trucks also deliver a message to Vietnam Veterans: “On behalf of a grateful nation, thank you for your service and sacrifice.”

Alongside the message is an image from the National Archives of a young Warfighter, and in the background names carved into the Vietnam Veterans Memorial Wall can be seen.

The Exchange created the custom truck design to express gratitude to Vietnam Veterans. As a partner with the United States of America Vietnam War Commemoration, the Exchange plans and conducts events to recognize the service, valor and sacrifice of Vietnam Veterans and their families.

“It’s so important we always remember these Veterans’ service,” said Exchange Director/CEO Tom Shull, who served in the Army during the Vietnam era. “The Exchange is grateful for our Vietnam Veterans and for the opportunity to thank them with this special truck design.”

“The Exchange’s truck design is a rolling tribute to Vietnam veterans,” Jackson said. “Every time these trucks are on the road, they are supporting the Commemoration’s mission of honoring our brave Vietnam Veterans and their families.”

“I think it’s great because it lets everyone who served know they were appreciated,” said Ashley, who served in the Air Force on active duty for four years and in the Reserves for 21 years. “That’s all they want, just to be appreciated.”

Ashley likes that the truck communicates who the Exchange is serving—the men and women who have worn our Nation’s uniform.

“When I went overseas, that was the one thing we looked forward to: seeing the Exchange there,” Ashley said. “It felt like home when you walked in.”

The trucks also highlight that all honorably discharged Veterans can now shop the Exchange tax-free for life at www.ShopMyExchange.com. Since the benefit launched in November 2017, Veterans shopping the Exchange online have saved nearly $5 million in sales tax.

The three Exchange trucks will transport goods from the Exchange’s continental U.S. distribution centers to service members throughout the country.

The United States of America Vietnam War Commemoration is a program administered by the Office of the Secretary of Defense to commemorate the 50th anniversary of the Vietnam War. The commemoration was authorized by Congress, established under the secretary of defense and launched by President Barack Obama in 2012. It will continue through Veterans Day 2025.

The Exchange is the Department of Defense’s largest retailer. For 123 years, the Exchange has served the military community by providing retail goods and services at installations around the world and at www.ShopMyExchange.com. Its trucks are an essential part of fulfilling the Exchange’s motto of “We Go Where You Go” to provide soldiers, airmen, veterans, retirees and their families with tax-free shopping at military exclusive prices.

Additionally, 100 percent of Exchange earnings are reinvested in the community, including through Quality-of-Life programs like Army Child Development and Fitness Centers and Air Force Outdoor Recreation. In the last 10 years, the Exchange has contributed $2.4 billion to these programs.