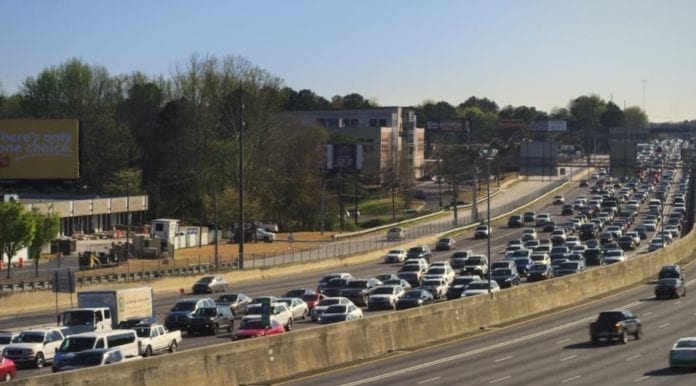 A new TV ad by the American Trucking Associations on the cost of crumbling roads says the average motorist spends 42 hours a year in traffic jams caused by roadwork and congestion. (ATA)

ARLINGTON, Va. — The American Trucking Associations is taking a multi-pronged approach to get Congress moving on comprehensive funding for the nation’s infrastructure, with an eight-week TV ad campaign, digital ads, bills to be introduced in the House’s Ways and Means and Transportation and Infrastructure Committees later this spring and a bombardment of Washington, D.C., and state Congressional districts by state trucking associations and other industry representatives.

However, said ATA President and CEO Chris Spear at a news conference Wednesday, President Donald Trump will have to put his full weight behind funding efforts for it to move forward.

The ATA and other trucking stakeholders have historically wanted road funding to come from increased fuel taxes, which lawmakers have shied away from for fear they won’t get re-elected.

But Spear pointed out that some 20 states have passed their own fuel tax increases and 96 percent of lawmakers in those districts have been re-elected.

Regardless, Washington lawmakers have still been reluctant to take up anything that resembles a tax. Why would now be any different, Spear was asked.

He said with the president behind a comprehensive funding package for roads, “over 60 percent” of House members on both sides of the aisle would be motivated to climb aboard, although there’s always a contingent who won’t be behind a tax in any form.

Legislation hasn’t been drafted yet, Spear said, but bills could be introduced as early as June.

The TV ad shows various people planning their days: one lady has a baby on the way, another is traveling to see a relative returning from service overseas, while a small boy is eager for his father to see him play in a baseball game.

All are delayed by road construction and congestion, with the ad noting that the average American spends 42 hours a year stuck in traffic while life continues to move “full speed ahead.”

Spear said, “Between time lost and the $1,600 in vehicle damage and wasted gas the average American is saddled with, we are no longer at the brink — we are living in a crisis situation.  The ATA is launching this campaign to highlight the very personal impact of poor roads and the urgency necessary for Congress and the administration to take action.”

House Ways and Means Committee Chairman Richard Neal, D-Mass., and House Transportation and Infrastructure Committee Chairman Peter DeFazio, D-Ore., are among the representatives ATA is concentrating on, with Spear saying the plan is to get House members behind it first because the Senate won’t likely make a move until it sees what kind of road funding bill the House produces.

Asked why ATA isn’t behind a vehicle-miles-traveled tax, Spear said that despite trial programs in some states, it’s “not ready for prime time,” with both cyber security and privacy issues still to be ironed out.

The TV ad concludes that it’s “time for Washington to get moving ahead,” with which truckers and other motorists could no doubt agree.