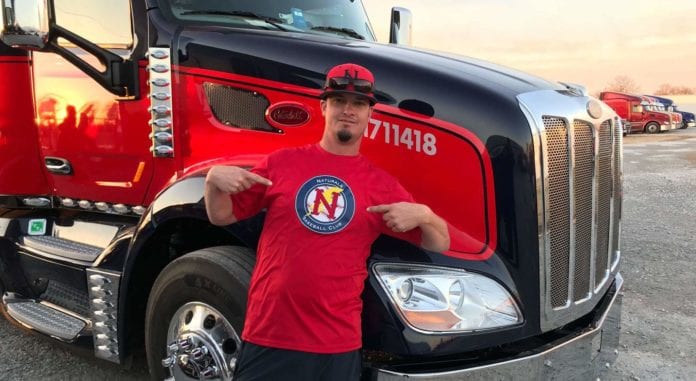 The DRIVE-Safe Act establishes an apprenticeship program that would allow for the legal operation of a commercial motor vehicle in interstate commerce by CDL holders under the age of 21. (The Trucker file photo)

WASHINGTON — Sens. Todd Young and Jon Tester in a bipartisan move on Tuesday reintroduced the Developing Responsible Individuals for a Vibrant Economy (DRIVE-Safe) Act, which the senators said would address the driver shortage in the trucking and logistics industry and enhance safety training and job opportunities for young truckers.

Reps. Trey Hollingsworth and Henry Cuellar introduced a companion bill in the House.

Though many states allow individuals to obtain a commercial driver’s license at the age 18, federal law currently prohibits those operators from moving goods from state to state until they are 21.

The DRIVE-Safe Act establishes an apprenticeship program that would allow for the legal operation of a commercial motor vehicle in interstate commerce by CDL holders under the age of 21.

The apprenticeship training program would help ensure these drivers are trained beyond current standards while instituting rigorous safety standards and performance benchmarks, according to the text of the bills.

The DRIVE-Safe Act was first introduced in August 2018, during the just-completed Congressional session. It was read twice and referred to the Senate Commerce, Science and Transportation Committee, but no further action was taken.

“The strong bipartisan, bicameral support behind this legislation demonstrates how real a threat the driver shortage presents to our nation’s economic security over the long term – and how serious our lawmakers are about addressing it with commonsense solutions,” Spear said. “Given the broad coalition of interests backing this measure, there is growing understanding across the country that the impact of this issue reaches far beyond just trucking and commercial vehicles. It is a strain on the entire supply chain, from the manufacturers and producers on down to retail and the end consumer, who will see higher prices at the store.”

“There is not a shortage of truck drivers, but very high turnover, and the solution is to improve compensation and benefits,” she said Thursday morning.

Later in the day Thursday, OOIDA President and CEO Todd Spencer sent a letter to members of Congress urging them to reject efforts to change the age requirements.

The Truckload Carriers Association said it supports all efforts to gather information and actionable evidence on the safety implications of incorporating 18-20-year old driver into the interstate truck driving labor force.

“Data-driven decision making should be the bedrock of any sound policy,” said David Heller, TCA’s vice president of government affairs.

ATA is a member of the DRIVE Safe Act Coalition, co-led by ATA and the International Foodservice Distributors of America, and includes the National Association of Manufacturers, National Restaurant Association, National Retail Federation, Retail Industry Leaders of America and more than 40 other national trade associations and companies.

While 48 states permit individuals to obtain a commercial driver’s license and drive trucks at age 18, federal regulations prevent those drivers from crossing state lines until they turn 21.

“This restriction bars a vital population of job seekers from interstate trucking, exacerbating the driver shortage, as qualified candidates are lost to other industries,” Spear said. “The DRIVE Safe Act would allow certified CDL holders already permitted to drive intrastate the opportunity to participate in a rigorous apprenticeship program designed to help them master interstate driving, while also promoting enhanced safety training for emerging members of the workforce.”

The ATA said the DRIVE Safe Act would help train younger drivers far and above current standards. Under the legislation, once a driver has met the requirements to obtain a CDL, they would begin a two-step program of additional training that includes a number of performance benchmarks each candidate must demonstrate competency in. In addition, they would be required to complete at least 400 hours of on-duty time and 240 hours of driving time with an experienced driver in the cab with them. All trucks used for training in the program must be equipped with NTSB-endorsed safety technology including active braking collision mitigation systems, forward-facing video event capture and a speed governor set at 65 miles per hour.

Significantly, the ATA said, all of these post-CDL training, safety, and technology standards under the DRIVE Safe Act would be required on top of all the pre-CDL training benchmarks that new drivers will be required to satisfy when the Entry Level Driver Training Rule goes in to effect in February 2020, which includes 59 different topics of knowledge and behind-the-wheel training for Class A CDL applicants.

In his letter to Congress, Spencer said younger drivers, especially teens, generally lack the maturity and experience to operate a commercial motor vehicle the safest levels.

“Research consistently concludes that CMV drivers under the age of 21 are more likely to be involved in crashes,” Spencer wrote. “In some states, teenagers entering the apprentice program created by the legislation would have only recently received a full driver’s license to operate an automobile, let alone a CMV. While these clear safety implications alone should dissuade elected officials from lowering minimum age requirements, professional drivers understand there are long-standing problems within the trucking industry that such a change would only worsen.”

Rather than developing legislation to allow more teenagers behind the wheel of 80,000 pound trucks, Congress should be taking steps to reverse the incessantly high driver turnover rate, which remains above 90 percent among large truckload carriers, Spencer said.

“Though allowing CDL holders under the age of 21 to engage in interstate commerceis unlikely to reduce driver turnover or improve safety, we appreciate the DRIVE-SafeAct’s approach to robust new entrant training. Aspects of the minimum standards included in the legislation, especially 240 hours of mandatory behind-the-wheel experience, are a good starting point for enhancing federal training requirements for current entry-level drivers, regardless of age,” he said.

Click here to read the text of the bill.