Home The Nation Bison Transport, Erb International earn top safety awards at TCA convention
For the 10th consecutive year, Bison Transport of Winnipeg, Manitoba, Canada, won the grand  prize of the large carrier division in the Truckload Carriers Association Fleet Safety Award. It is the 13th time that Bison has been so honored. (Courtesy: BISON TRANSPORT)

KISSIMMEE, Fla. — It was a lucky 13 for Bison Transport, which was named grand prize winner of the large carrier division of the Truckload Carriers Association (TCA) Fleet Safety Award contest during the association’s 82 annual convention here.
Bison Transport, which competed in the more than 25 million mile division, is located in Winnipeg, Manitoba, Canada.
The contest was a clean sweep for Canadian carriers as Erb International of New Hamburg, Ontario, Canada, was named grand prize winner in the less than 25 million mile division.
Both carriers demonstrated that they had unrivaled safety programs and impeccable records over the last year.
Erb International, Inc. is a two-time winner of the grand prize. Bison Transport is a 13-time grand prize winner and is receiving this award for the 10th consecutive year.
Both companies, as well as all carriers which placed in the top three of their mileage-based divisions, will be recognized again during TCA’s Annual Safety & Security Meeting June 7-9, 2020, at the Louisville Marriott Downtown Hotel in Louisville, Kentucky.
“TCA is honored to recognize Erb International and Bison Transport for their incredible safety achievements,” said TCA President John Lyboldt. “This year’s competition was full of great entries, showing that TCA’s members are truly industry leaders when it comes to safety. Erb and Bison are very deserving of the grand prize due to their commitment to spreading the safety message with their employees, the wider industry, and those with whom they share the roadways.”
The application process for the awards began with fleets submitting their accident frequency ratio per million miles driven. The three carriers with the lowest ratios were identified as the winners for each of six mileage-based divisions. These carriers then underwent an audit by independent experts to ensure the accuracy of their results. TCA announced the names of the 18 division winners in January and invited them to submit further documentation about their overall safety programs, both on and off the highway, to be eligible for the Grand Prize. After review by a diverse industry panel of judges, the winning companies were deemed to have best demonstrated their commitment to improving safety on North America’s highways.
For more information on the program, visit www.truckload.org/Fleet-Safety. 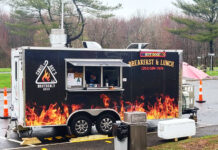