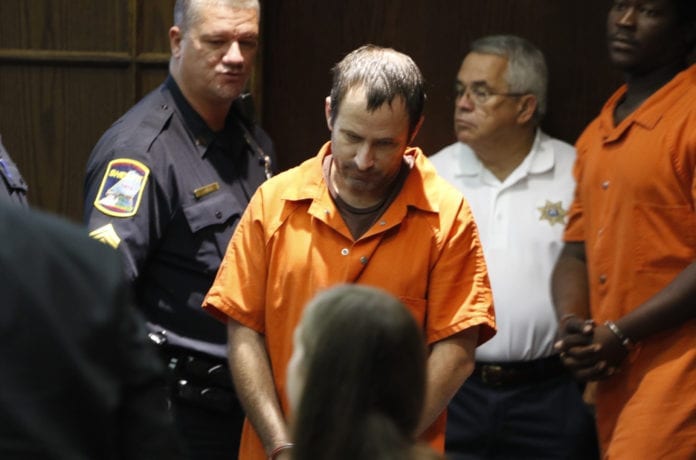 Benjamin Scott Brewer, center, appears before Judge Don Poole for arraignment in Chattanooga, Tennessee, on September 11, 2015. Brewer, a driver for Cool Runnings Express of London, Kentucky, who was involved in a fatal crash, was convicted on several counts and sentenced to 83 years in prison. Brewer’s employer recently filed for bankruptcy as a result of lawsuits following the accident. (Associated Press: DAN HENRY/Chattanooga Times Free Press)

CHATTANOOGA, Tenn. — Chattanooga television station WRCB is reporting that Cool Runnings Express, a London, Kentucky, motor carrier, has filed for bankruptcy as the result of lawsuits filed after a Cool Running Express truck was involved in an accident on I-75 that killed six and injured several others.

Cool Runnings Express owner Billy Ray Sizemore noted owing $331,323,904 in claims from lawsuits and said the company had assets of $101,423.93. The company is listed as an inactive carrier in the Federal Motor Carrier Safety Administration database.

The truck was driven by Benjamin Brewer, who was found guilty of six counts of vehicular homicide and four counts of reckless aggravated assault and guilty of DUI and speeding.

He was sentenced to 83 years in prison.

Within days of the crash, the FMCSA declared Brewer to be an imminent hazard to public safety and ordered him not to operate any commercial motor vehicle in interstate commerce.

The FMCSA said a post-crash investigation revealed that Brewer had falsified his records-of-duty status in the days leading up to the crash, specifically reporting that he had been off-duty from June 15 until 7 a.m. June 25.   The vehicle tracking system used by his employer, along with other records, shows that Brewer had been on-duty and driving on June 22, 23, and 24.

Brewer’s application for employment, dated June 16, 2015, and which required him to list all accidents and traffic convictions occurring in the previous three years, omitted a June 2013 crash and a January 2015 citation for speeding 16-20 miles-per-hour above the limit.  In May 2015, Brewer tested positive for controlled substances following a court-ordered test.

Documents show $3.5 million is owed to the Close family, the television station reported.

“They’re saying definitely this is a liability that’s out there hanging over our heads,” said attorney Danny Ellis.

Last year, eyewitnesses testified during Brewer’s trial, including Tina Close. She recalled the moments before the wreck.

“There was a semi coming behind us in our lane very fast,” Close said on the stand.

Close, her husband and their two young children were among those hurt while waiting in traffic. The family filed a lawsuit in May 2018 against Brewer and Cool Runnings Express, Inc. Ellis represents the family. He says they were set to start trial on Nov. 18, 2019. However, it was placed under an automatic stay (put on hold) because of the trucking company’s bankruptcy filing.

“I warned the Close family and then when I told them they filed, it was, ‘well, we thought that’s what was going to happen,’” Ellis said. “I feel pretty confident we can get it lifted.”

Since the bankruptcy was filed in London, Kentucky, Ellis says it will be up to a judge there to give them permission to move forward with their case.

“All of the different parties that have filed suit against Cool Runnings will approach the court and say, ‘we understand they have filed bankruptcy, but there’s this insurance policy in place. We will proceed against that. Also, if there are any assets left over, we are making a claim against those, as well,” Ellis said. “It’s one more hoop that we go through to get to that final day.”

It’s not clear when a decision will be made, but Ellis says the push to hold those responsible accountable will not stop.

“There’s a lot of unknowns. It could be 30 days. It could be three months, who knows,” Ellis said. “We have to look at the local rules to see if we have to hire a Kentucky attorney to file the proper motions with the bankruptcy court to move it forward.”