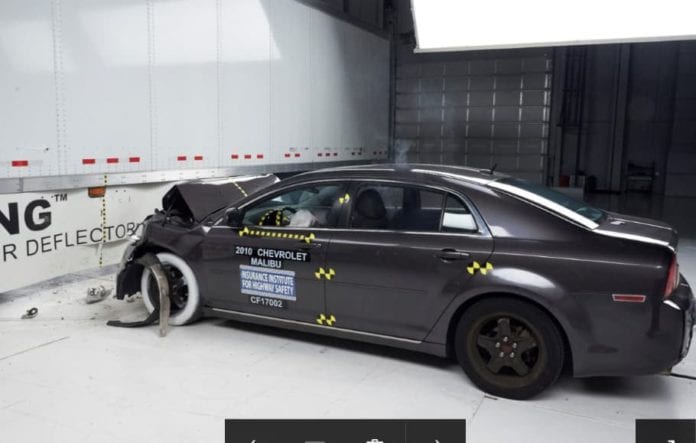 A coalition opposing a coalition opposing an underride mandate said over the last five decades, the National Highway Traffic Safety Administration has considered numerous proposed rules involving underride guards, but consistently concluded mandates would be impractical and the costs associated with their implementation would far outweigh any perceived safety benefits. (Courtesy: INSURANCE INSTITUTE FOR HIGHWAY SAFETY)

WASHINGTON — The Owner-Operator Independent Drivers Association says it is leading a coalition of dozens of trade associations to oppose what the coalition calls “four burdensome, costly, and unsafe trucking mandates.”

The group said it strongly opposes mandates that would require heavy vehicles to install underride guards, speed limiters and automatic emergency braking systems. The coalition also opposes a bill that would increase minimum insurance requirements for motor carriers by over $4 million.

“Unlike our coalition partners, supporters of these mandates know virtually nothing about trucking,” said Todd Spencer, president and CEO of OOIDA. “The unfortunate reality is these mandates would likely decrease safety, not improve it, while imposing astronomically high costs on a wide variety of industries. That’s the point we’re conveying to Congress,” said Spencer.

The coalition estimates the four mandates would cost their members “tens-of-billions of dollars.”

The letter goes into more details and highlights the inherent problems with imposing one-size-fits-all requirements on industries that utilize a wide array of heavy vehicles in often vastly differing ways.

In short, the coalition describes the underride guard mandate as unworkable and impractical; the speed limiter mandate as dangerous; the automatic emergency braking mandate as a hazard for drivers; and the increased insurance mandate as primarily an opportunity for trial lawyers to receive greater payouts at the expense of U.S. businesses.

“Certain trailers, including low boys and auto transporters, aren’t capable of being fitted with side or rear underride guards,” the group said. “The bill mandates front underride guards on single unit trucks, yet no front underride equipment is currently available on the market because the concept lacks any practicality. And the installation of side underride guards strong enough to achieve their supposed safety value would create serious operational challenges for drivers, and displace a significant amount of payload.”

“Decades of highway research shows speed differentials result in more interactions between truck drivers and other road users,” the letter said. “Studies have consistently demonstrated that increasing interactions between vehicles directly increases the likelihood of crashes. We are concerned the proponents of this legislation are overstating its perceived safety benefits. In fact, the bill would do nothing to prevent 77% of all crashes involving heavy vehicles, because data reveals these incidents occur when the truck is traveling below 65 mph.”

The coalition said that while automatic emergency braking is designed to help reduce or prevent rear-end collisions, the technology is still in its infancy and can create new challenges and dangers for drivers, such as false or unexpected system activation. AEB technology is also very expensive and studies have shown it is not clear that the benefits of these systems would outweigh the costs

In their effort to prevent these bills from advancing through Congress, OOIDA is particularly thankful that so many stakeholders are getting involved early in the legislative process.

“We’re proud to lead a broad coalition that is concerned about the direction Congress is going when it comes to trucking. We think this group will continue to grow in the coming weeks and months, and we look forward to further engaging elected officials on these critical issues,” Spencer said.