Home The Nation Driver, 82, of church-owned bus charged after crash with being intoxicated 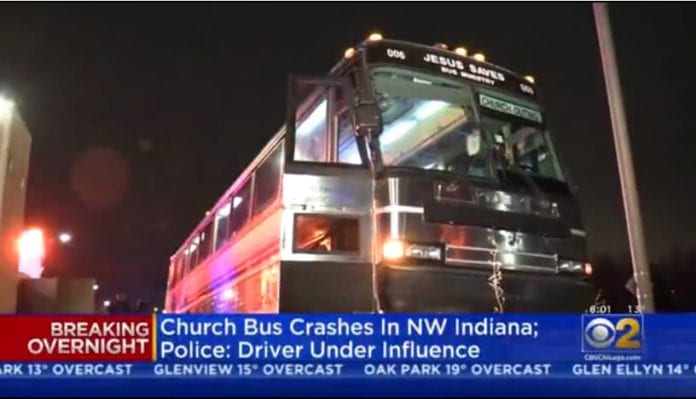 A bus owned by Jesus Saves Missionary Baptist Church in Gary, Indiana, sits by the road in this video capture from CBS 2 in Chicago after it veered off the Indiana Toll Road and crashed.

GARY, Ind. — The 82-year-old driver of a church-owned bus was charged with driving under the influence after the bus he was driving carrying a youth sports team home from a Chicago Bulls game veered off the Indiana Toll Road and crashed.

Chicago television station CBS 2 reported that Wilton Carr was arrested and taken to the Lake County Jail on four counts of operating the bus while intoxicated.

A group of more than 40 kids with the Gary, Indiana-based Above The Rim Youth Sports Foundation attended the Bulls game at the United Center and even got a chance to be on the court at halftime.

Above The Rim rented the bus from Jesus Saves Missionary Baptist Church, and the bus and driver came together.

Indiana State Police said while they were headed home, going east on the Indiana Toll Road, one of the chaperones on their bus noticed something was wrong with the driver.

One of the coaches on the bus said he woke up just before the crash and saw the bus veering off the road.

A coach on the bus told CBS 2 that was happened was two minutes of chaos.

“I got up, and I kind of grabbed the bus driver. And I told him, I was screaming in his face, ‘Stop! Stop! Stop!’” Jason Rhodes said in a phone interview with CBS 2.

The bus, owned by the church, went off the pavement and onto a gravel embankment between two guard rails on the center median just before the Cline Avenue exit. The front tires ended up completely off the ground.

Everyone on the bus was tossed from their seats.

Akeesha Daniels was waiting to pick up her 15-year-old son at the Village Shopping Center in Gary when she got a call about the crash.

“My son was actually FaceTiming me outside the bus, and I said, ‘Xavier, where are you?’ He was like, ‘Oh, the bus was in a crash,’ and I’m looking like, ‘A crash where?’” Daniels said. “I was like, oh my God, if this bus would have went, if he would have been going a little faster, the bus would have ended up in the water.”

One adult and several children were taken to hospitals after the crash to be treated for leg injuries and for head and neck pain.

The church’s website includes mention of its bus ministry.

“After moving into our new church home, with the blessings of the Lord and the foresight of our Pastor, we were able to burn the mortgage in two years,” the site reads. “The Lord also gave our Pastor the vision to start a bus ministry. The bus ministry continues to provide service to our community for short- and long- distance trips.”

Parents said they are thankful no one was seriously injured.

“That’s all I kept saying to myself when it said on the side of that bus ‘Jesus Saves.’ Oh, Jesus saved everybody,” Dianna Darden said.

The church has not responded to phone calls and emails asking for a comment on the crash.