Home The Nation Driver who aided woman after wrong-way crash named Highway Angel of the... 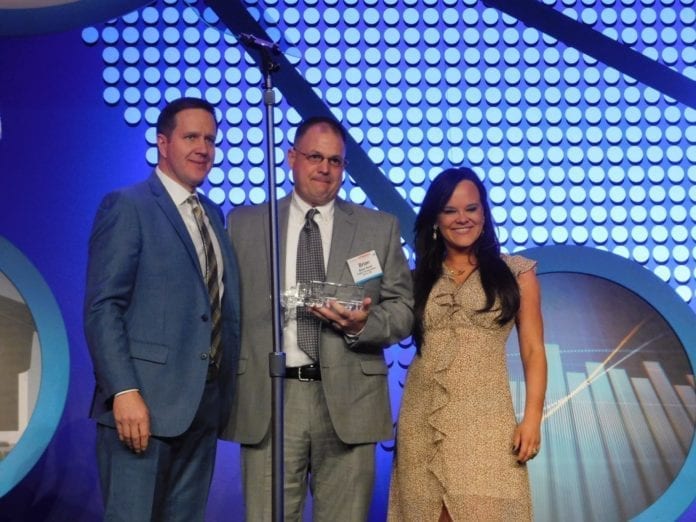 LAS VEGAS — For most people, there are maybe only a handful of instances in their lives that call for an act of heroism.

“We’d all like to believe that if the situation presented itself, each of us would be able to step up and offer assistance to others in their time of need,” Truckload Carriers Association Chairman Dan Doran said March 12 at the general session of the closing day of the 81st annual TCA convention.

With as much time as professional truck drivers spend out on the open road, they are more likely than most folks to come across fellow travelers who need help. And every year, there are several stories of drivers who step up to offer their assistance.

In 1997, TCA and corporate sponsor EpicVue created the Highway Angels program “to improve the public’s image of the trucking industry by highlighting positive stories of professional truck drivers who display exemplary acts of kindness, courtesy, and courage while on the job,” Doran said.

Highway Angels are recognized throughout the year. “EpicVue is honored to recognize these incredible professional truck drivers, who put themselves sometimes in great danger to help a fellow truck driver, a motorist, and even a small child who may be wandering alone in the dark,” said EpicVue CEO Lance Platt.

Lawler, the official spokesperson for the Highway Angel program and whose song “Highway Angel” is a tribute to the spirit of the program and to the drivers who personify that spirit, said Snell “is passionate about what he does, humble, and an overall brilliant example of what this program aims to highlight.”

A brief video prior to the presentation described the early-morning rescue for which Snell was being honored. After the ceremony, he recalled the incident in his own words.

Snell was driving on I-495 in Massachusetts at about 2:15 a.m. on June 8, 2018, when he saw the headlights of a vehicle driving the wrong way up ahead before it hit something and spun out to a stop. Snell stopped his truck in the middle of the road, blocking oncoming traffic from the crashed car.

As other motorists stopped, Snell got out of his truck to assess the situation. The car’s front end was mangled, and the woman behind the wheel was unconscious.

Snell is no stranger to emergency situations. He joined the Marines in 1989, but an injury sustained in boot camp curtailed his military career. After his discharge in 1992, he spent nearly five years as a paramedic in Nashua, New Hampshire, near his hometown of Merrimack, before becoming a sheriff’s department rescue worker.

“I used to do a lot of high-angle rescue work,” Snell said. “It’s rope work. We were up on ledges, mountain work and all that.”

Even in his spare time, Snell has done “a ton of volunteering,” he said, including rescue work on New Hampshire’s Mount Washington. At 6,288 feet, Mount Washington is the highest peak in the Northeast and part of the Appalachian Trail. It is popular with hikers, cyclists and gliders, but weather conditions can turn treacherous quickly.

“And when the World Trade Center went down I wound up going to Ground Zero working search and rescue down there.”

Snell spent five days as a volunteer at Ground Zero “literally digging in the dirt and going through the pile itself,” he said. He was among the rescue workers who became casualties of the attack after the fact. Part of his diaphragm became paralyzed and he lost a lung due to the prolonged exposure to the particulate matter in the air.

“Obviously, after 911, law enforcement was out because of the disability with my lung,” Snell said.

Snell was already on his way to becoming a full-time professional truck driver. “My grandfather for years told me to get my truck license,” Snell said. “I was like, ‘I don’t want to be a truck driver.’” But turning an economic downturn he had taken his grandfather’s advice and had started what had been a gradual transition from emergency work into trucking.

In those early morning hours last June, Snell’s professional worlds came together when he came to the driver’s assistance.

“The car was on fire,” he said. “I put the flames out with the fire extinguisher. Then I started working on her to make sure she was conscious and breathing and all that.”

While he was doing that, he heard one of the other motorists who had stopped to help yelling some distance away that they “couldn’t get in.” That’s when Snell realized that another vehicle had been involved in the crash.

“I thought she’d just bounced off the guardrail,” Snell said, but she had collided head-on with another car. He went over to the second car and saw the driver, a 32-year-old man, was dead.

There was a dog inside the car, and Snell had to smash a window to get to it. As it happened, the first officer on the scene was a K-9 officer, so Snell left the dog in his care then he returned to the first car to help rescue workers extract the woman.

He said when Highway Angel organizers first tried to contact him about being an honoree, he didn’t return their phone calls. “I don’t do what I do to be recognized, you know what I mean?” he said. “And finally my company got involved and said, ‘You got to call back.’

Being named a Highway Angel was an honor, he said, and then when he heard he had been named Highway Angel of the Year, he was “ecstatic,” but he admitted he’s had mixed emotions because of the circumstances around the incident.

“It’s a very bittersweet award to accept,” Snell said. “I’m literally being honored for saving someone who killed somebody.” The woman, who was intoxicated at the time of the crash, has been charged with vehicular homicide.

“Hopefully, she changes her ways,” he said.

The Highway Angel of the Year was created to honor the person who best embodies the spirit of the Highway Angel program. Snell, 50, said he’s been doing rescue work, professionally and as a volunteer, since he was on the American Red Cross Disaster Team in high school.

He’s even delivered a baby along the roadside. Putting yourself out there for your fellow human beings is simply part of the values by which he was raised.

“My whole family is community driven,” he said. “The Lord has always told everybody he wants us to be the Good Samaritan, and I don’t pass that up. Anybody I can help, I try to do anything I can for them.”