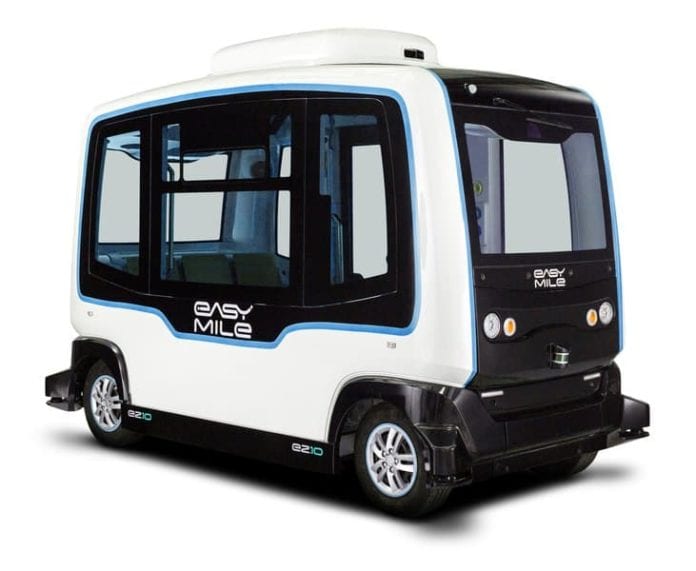 The Utah Department of Transportation is conducting a 12-month, autonomous shuttle pilot program. The electric shuttle doesn’t have a driver’s seat, steering wheel or brake pedal. It holds up to 12 passengers and goes up to 15 mph. (Courtesy: UTAH DEPARTMENT OF TRANSPORTATION)

WASHINGTON — A multi-organization letter sent to the Senate Committee on Commerce, Science, and Transportation and the House of Representatives Committee on Energy and Commerce on September 12 stressed that implementing a successful national autonomous vehicle or AV policy requires finding the “appropriate balance” between state, local, and federal government responsibilities — ensuring that appropriate funding and incentives are in place for “desired outcomes.”

“Many of our members have expressed concerns that these new technologies may not be subject to appropriate safety rules or standards as they are developed and then tested or deployed on public roadways with other road users,” the groups noted in their letter, as published by the Journal, the official publication of the American Association of State Highway and Transportation Officials.

“We therefore urge the submission of a highly detailed safety evaluation report and its subsequent and timely release to the public,” they said. “We urge you to avoid the creation of a safety vacuum – the combination of a federal regulator that does not act and a perpetual prohibition on states from acting.”

The electric shuttle doesn’t have a driver’s seat, steering wheel or brake pedal. It holds up to 12 passengers and goes up to 15 mph.

To that end, the organizations argued that state and local governments are the “primary authority” concerning vehicle operational safety – including “regulating the operation of motor vehicles after such vehicles have been constructed, the operators of those motor vehicles, as well as establishing the rules of the road on how motor vehicles can be safely operated on public roadways” – and compromising that authority could compromise safety.

“Protecting public safety on the roadways is one of the fundamental roles of state and local government,” according to the letter.

“With the rapid pace of autonomous technological innovation not being matched by corresponding vehicle safety standards or other requirements by the National Highway and Traffic Safety Administration, states and cities have stepped into this role in order to ensure that autonomous vehicle testing – which is aimed at improving this technology – is done in a safe and responsible manner,” the groups noted.