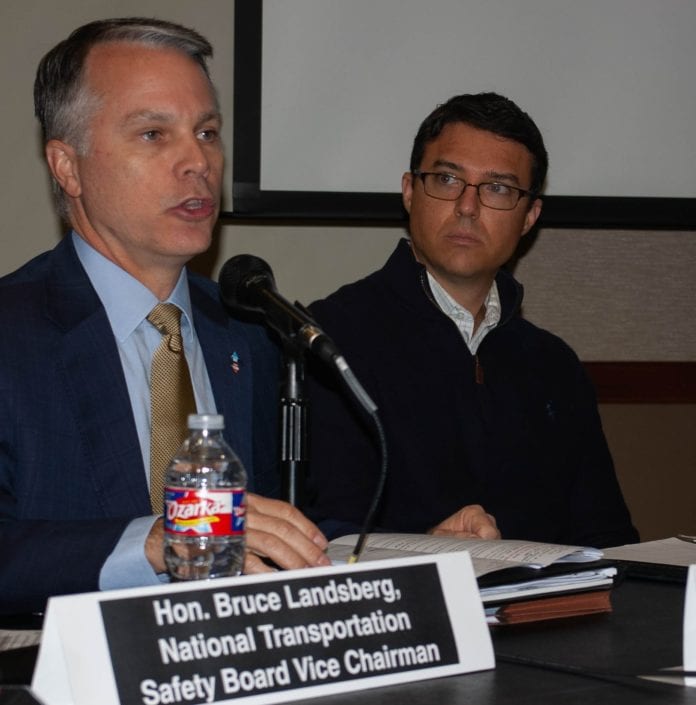 American Association of State Highway and Transportation Officials President Patrick McKenna, left, said during a summit on distracted driving he hopes during his one-year term as AASHTO’s president to “facilitate a conversation” with state DOTs, localities, and other organizations to focus on improving roadway safety in the United States for all users, be they motorists, pedestrians, bicyclists, or scooter operators. (Courtesy: MISSOURI DEPARTMENT OF TRANSPORTATION)

COLUMBIA, Mo. — Distracted driving is “truly one of the most significant issues in transportation across our nation,” said Patrick McKenna, director of the Missouri Department of Transportation and the American Association of State Highway and Transportation Officials (AASHTO) 2019-2020 president, in remarks during a one-day roundtable hosted by the National Transportation Safety Board here Tuesday.

NTSB Vice Chairman Bruce Landsberg noted at the summit — an event the agency coordinated with the Missouri Coalition for Roadway Safety, StopDistractions.org and the University of Missouri — that the issue of distracted driving is on its list of 2019-2020 “Most Wanted” Transportation Safety Improvements and that it is the cause behind nearly 10% of U.S. traffic fatalities.

As reported in the Journal, AASHTO’s official publication, Landsberg also pointed to more specific data compiled by the National Highway Traffic Safety Administration that, in 2015, some 3,477 fatalities and 391,000 injuries were the result of distracted driving crashes in the United States, costing an estimated $40 billion in losses. He added that “education, legislation, and enforcement” are all “critical elements” for reducing distracted driving.

Nicole Hood, state highway and traffic engineer for the Missouri DOT, added during the roundtable that in 2018 there were 79 fatalities, 19,239 total crashes, and 7,345 total injuries involving a distracted driver across the state – costing the state $1.7 billion.

“We’re trying to change that via educational initiatives, such as our ‘Buckle Up, Phone Down‘ campaign,” Hood said, adding that is because distracted driving is not just a “younger driver problem” in Missouri as 70 percent of the state’s distracted driving crashes involved drivers aged 22 years or older.

That’s one reason why Missouri DOT’s McKenna expressed the need at the summit to cast a wider net when it comes to improving highway safety.

Even though overall highway fatalities declined in 2018 compared to 2017, according to the latest NHTSA figures, McKenna added that he hopes during his one-year term as AASHTO’s president to “facilitate a conversation” with state DOTs, localities, and other organizations to focus on improving roadway safety in the United States for all users – be they motorists, pedestrians, bicyclists, or scooter operators.

“Every day 100 Americans die traveling on our transportation network and distracted driving is an element of that,” he stressed. “That number must be made unacceptable. We can to do better than this. That’s why I plan to put national action plan together; to renew our focus on what is public health crisis.”