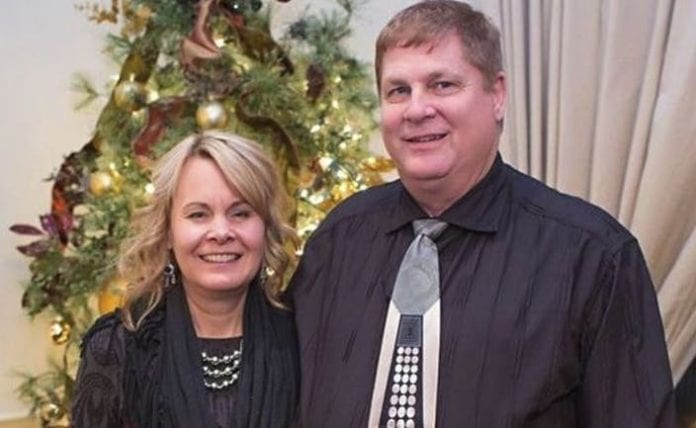 Vernon C. Hedquist, shown here with his wife Cindy, was just short of his 60th birthday when he was killed in an accident at a road work site in October 2018 (Courtesy: HEDQUIST FAMILY)

MINNEAPOLIS — A Minnesota truck driver has been charged with criminal vehicular homicide in connection with the October 2018 death of a construction worker on Interstate 94 in Rogers, Minnesota.

Authorities have arrested and charged 47-year-old Tate R. Doom who was driving a tractor- trailer that smashed into the back of a trailer hooked to a pick up truck in a construction zone sending the trailer attached to the pick up into the work zone striking and killing Vernon C. Hedquist, 59, of Pillager, Minnesota, who was standing beside the road, according to the Minneapolis StarTribune.

“It appears, based on the investigation, that he was watching pornography [on his cell phone] at the time of [impact],” said Chuck Laszewski, a spokesman for the Hennepin County, Minnesota, Attorney’s Office told the StarTribune.

Based on time stamps on Doom’s phone, one video, which has a running time of 5 minutes and 14 seconds, was started less than 90 seconds before the fatal accident, authorities said. Investigators were able to look at the phone’s time stamps to confirm this.

Doom had been driving for the industrial and agricultural company Vermeer, out of Burnsville, when the crash unfolded, according to authorities.

“He absolutely was very concerned about his safety on the job,” Hedquist’s wife, Cindy, told the StarTribune. The couple had been married for 34 years.

“It is frustrating for construction workers who have to be out in all conditions, all types of weather and they have to focus on what they are doing,” said Minnesota Highway Patrol Lt. Tiffani Nielson at the time of the accident.

Doom denied using his cellphone at the time of the crash.

Hedquist, a Sunday school teacher who was looking forward to deer hunting season and his 60th birthday last November, his wife said.

Authorities said Doom was traveling 72 mph in a 70-mph zone when the accident occurred.