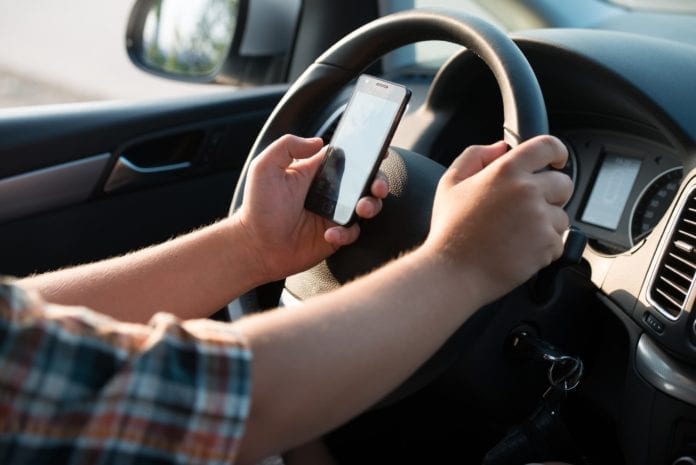 Right now, South Dakota drivers can't text or email when operating a vehicle, but they must be pulled over for a different violation for it to be enforced. (©2019 FOTOSEARCH)

PIERRE, S.D. — A House panel on Tuesday endorsed a bill that would expand South Dakota’s texting while driving ban to mostly prohibit mobile device use by people behind the wheel.

The House Transportation Committee voted 12-1 to advance the prohibition to the chamber’s floor. Republican Rep. Doug Barthel, the sponsor, told committee members that distracted driving is not safe.

“We can all agree that distracted driving is not a good thing. It’s just a question of whether or not we make it enforceable and against the law,” Barthel, a former Sioux Falls police chief, said after the meeting. “I think it’s something that is long overdue.”

Right now, drivers can’t text or email when operating a vehicle, but they must be pulled over for a different violation for it to be enforced. The new bill would increase the penalty for device use while driving and make it a primary offense, which means motorists buried in their phones could be stopped for it.

Texting, browsing Facebook and sending an email while on the road would be a misdemeanor. But using a navigation app, making a telephone call or operating in hands-free mode and using a device during an emergency would still be allowed.

There was no opposition testimony during the committee hearing.

Jacob Wilts, a South Dakota State University student who does track and cross country, asked members to support the bill, saying that a former high school teammate got killed by a distracted driver while out for a run.

“As somebody who runs around the streets and the sidewalks a lot, I’ll tell you that distracted driving is very scary,” Wilts said.