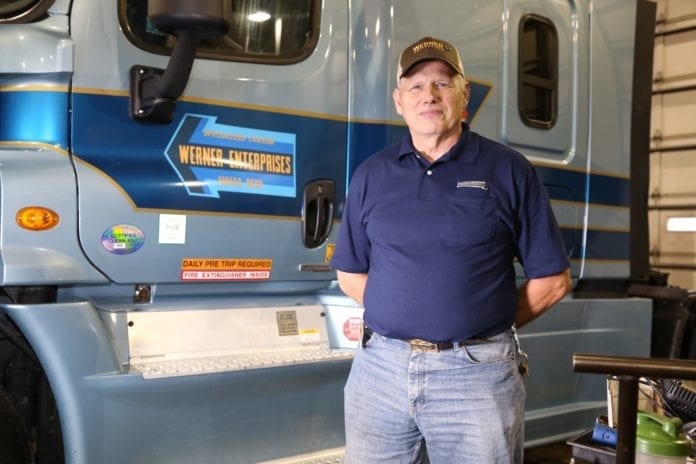 Michael Dewayne Sheeds, shown here in a photo taken for a newspaper article about his being named a Citizen Driver honoree, remains in jail following his arrest May 22 on a federal production of child pornography charge. (The Trucker file photo)

BANDERA, Texas — A recipient of multiple trucking honors has been arrested on a federal production of child pornography charge.

Bandera is some 40 miles southeast of San Antonio.

Sheeds, who spent 32 years as a truck driver,had become well known within the trucking community after he was chosen as an honoree for the TravelCenters of America/Petro Stopping Centers Citizen Driver award in 2015 and the Pilot Flying J Road Warrior award for 2017.

Sheeds, who drove for Werner Enterprises, was named to the American Trucking Association’s America’s Road Team for 2017-18.

As part of the Citizen Driver award, the Petro off Interstate 10 in San Antonio, Texas, was renamed the Michael Sheeds Petro Stopping Center.

Sheeds told The Trucker in an interview in 2015 that he chose the San Antonio Petro to be renamed in his honor because “I get home every weekend and usually during the summer, once or twice a week I meet the girls (his wife and four daughters) at the Petro and we get to be family.” Sadly, LandLine Magazine reported that following Sheeds’ initial arrest, his wife died on March 4. Authorities said the final toxicology report is pending, but the preliminary investigation determined the death to be a suicide.

The “permanence” of having a truck stop named for him, knowing it will be there “forever,” is “overwhelming,” he said. “It will be there when my girls are grown.”

The TA/Petro website no longer shows Sheeds as a Citizen Driver honoree.

He also was removed from Pilot’s list of Road Warrior winners.

After discovering Sheeds had allegedly sexually assaulted an underage female, the Bandera County Sheriff’s Office obtained an arrest warrant charging Sheeds with sexual assault of a child. Sheeds was located in Laredo, and arrested by Webb County Sheriff’s Office deputies on January 7, 2019, and has remained in the Bandera County Jail on the state charge.

In the course of the investigation, deputies obtained a Texas state search warrant for Sheeds’ vehicle, discovered several mobile devices and sought the FBI’s assistance in reviewing the digital evidence.

According to the federal complaint, the FBI recovered child pornography on the defendant’s cell phone and arrested Sheeds May 22.

The production of child pornography charge carries a penalty of a minimum of 15 years and a maximum of 30 years in federal prison.