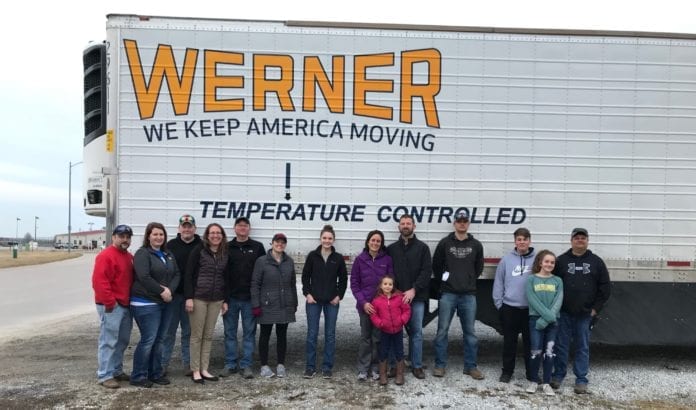 OMAHA, Neb. — Many states are still tirelessly working to recover after catastrophic flooding affected parts of the Midwest recently. Hundreds of families lost their homes, livestock, family pets, farm animals and some even lost family members.

Werner Enterprises is assisting with relief efforts across Nebraska after areas surrounding the company’s global headquarters in Omaha were impacted.

Werner has provided a significant cash donation along with providing a driver to help move supplies for the American Red Cross in Lincoln, Nebraska. Additionally, Werner donated two temperature-controlled trailers to hold perishable donations for those affected in Blair and Gretna, Nebraska.

A Werner trailer was also provided to the American Legion Post 32 in Papillion and to the Peace Presbyterian Church in Elkhorn, Nebraska, to store the donations they’ve received for those in need.

A Werner trailer has also been provided for the Nebraska Humane Society to collect donations for affected pets.

Werner and the Dollar General Corp. teamed up to donate 19 pallets of water to the Lincoln National Guard. A Werner professional driver also transported a full truckload of water for the Salvation Army from Omaha to Spencer, Nebraska.

A Werner professional driver transported a load of flood relief supplies from Lillington, North Carolina, to Omaha, Nebraska, for the Crossing All Borders Ministry. Additionally, Werner’s volunteer group, the Blue Brigade, is ready to assist with volunteer efforts where needed.

The devastation of this historic flooding is hitting close to home for some Werner associates. Information Exchange Specialist Jay Vrana has seen the devastation first hand.

She lives at Thomas Lake, near Ashland, Nebraska. Jay and her husband were stranded inside their home for four days, finally able to return to work Wednesday, March 20, after a temporary road was opened.

“Saturday night was brutal,” Jay said. “We woke up and our house was an island. They said they evacuated everyone and went door to door, but no one came to our house.” She says her family is lucky though, her neighbors on the other side of the lake can’t leave their homes, except by air boat because of a bridge collapse.

Company Store Manager Julie Mogler and her husband know firsthand the impact of recent flooding. They had been stranded inside their Riverside Lakes neighborhood near 228th and Dodge in Waterloo, Nebraska for seven days, finally able to return to work Friday, March 22. The only entrance in and out of their neighborhood was under water.

“We are really lucky there wasn’t any water in our basement or sewage issues,” Julie said. She and her neighbors were instructed to put towels in their drains to prevent sewage back up and sandbags were placed throughout the neighborhood to keep the water at bay. Officials instructed residents to avoid using the plumbing system for several days.

Julie says the residents in her neighborhood have come together to support one another and are very fortunate for the air boats that have brought in supplies like milk and fresh fruit. The owner of Oscars Pizza & Sports Grille in Omaha personally delivered 35 pizzas by air boat to the neighborhood residents.

“I have mixed emotions right now, it’s pretty stressful,” Julie said. “I’m just trying to focus on the positive. It’s all very exhausting but all in all, we’re very grateful.”

Werner recently provided a semi-trailer, driven by professional driver Mark Kreger, to be filled with donations for the Nebraska Humane Society at 90th and Fort in Omaha, Nebraska. It has been staffed from 9 a.m. through 7 p.m. on weekdays and 10 a.m. through 5 p.m. on weekends for donations.

Operations Supervisor Stacy White, her two young boys and two family dogs were forced to leave their home as water levels continued to rise in their small lake community. White lives in Villa Springs, which is right on the Platte River near Springfield, Nebraska. “We’re doing good, we were very lucky,” White said. For two days White and her family slept in their camper on a friend’s property. Her two sons, Conner and Ethan, handled the chaos well, bringing their video games with them to pass the time before they could go back home.

Not all the water is gone from White’s neighborhood, so she doesn’t know the extent of the damage to her yard, but she is extremely grateful there wasn’t any damage to her home.

As relief efforts continue, Werner has provided a temperature-controlled trailer to the Christian Church of Waterloo to store an overflow of food donations that will help feed flood victims.

Communities are starting the long process of recovery following the floods. That includes Director of Equipment Resources Corey Reed. His cabin in Waterloo, Nebraska, which sits near the Elkhorn river, was flooded with more than a foot of water inside. His furniture, wood floors and personal belongings were all ruined.

His shed with his snow blower, lawn mower and other equipment was also destroyed. Reed, his wife and stepson evacuated from their small community near 240th and F streets on March 14, staying in a hotel for a week before relocating to stay with a friend.

“It’s extremely stressful,” said Reed. “Not knowing all the damage and we still have many weeks until we can move back in and we wonder where we are going to live.”

Reed has been going back to his cabin every day, working to clean up the mud and sand. He’s been grabbing clothes they left behind and spending a lot of time washing them since they all smell like river water. Reed and his wife didn’t think they would be gone from their home this long or have this much damage, so they only took a few suitcases with them when they evacuated.

Reed and his neighbors are waiting for the county to fix the roads so larger trucks and machines can move in and help fix the damage around their homes. FEMA has contacted Reed and his family and are coming to their property on Thursday, March 28, to inspect the damage. Reed says they’ve spent the last 10 years remodeling their cabin, and it’s sad to see their work flooded. Corey and his family say they are extremely appreciative of the support they have received from friends and family during this difficult time.

Werner associates have an employee relief fund that benefits associates who experience circumstances like the flooding and Werner is matching each contribution, dollar for dollar.