Bud Hunter can’t remember a time when trucking wasn’t part of his life.

“Ever since I was born, I was always around trucks,” the Joplin, Missouri-based driver said.

Hunter grew up around trucks for good reason: The occupation runs in the family.

“My dad was a truck driver. I went with my dad every chance I got,” he said, adding that he wasn’t simply tagging along for the ride.

“Little did I know, the whole time I rode, he was teaching me the business,” Hunter said. “He’d always tell me to pull out the road map and tell him how far it was from this point to that point. Doing things like that helped me learn without realizing it.”

Hunter laments the fact that many young drivers he runs into today can’t read a map.

“My dad would also hand me his logbook,” he said. “He’d write in what he needed to, but he’d have me connect the lines.”

Hunter took what he learned from his dad and eventually opened a trucking company of his own.

“At one point I had 30 trucks and more trailers,” he said. “Today, I’ve downsized to three trucks, and two of those are for sale.”

In the early 1990s, Hunter ran into a dispatcher who worked for a company that leased its trucks to entertainers.

“They needed more trucks, so I started leasing some of mine to them,” Hunter said.

Before long, he was hauling entertainers’ equipment himself. Hunter said he’s worked with more recording artists than he can remember but that most of his work has been with country music performers.

“Deana Carter, Ricochet, John Michael Montgomery,” he said, listing just a few. “But my main deal was with Randy Travis.”

Hunter drove for Travis for more than 15 years, until the Country Music Hall of Fame member suffered a stroke in 2013.

“I think we were going to Deadwood, South Dakota,” Hunter said. “I was about to leave the house. The trailer was loaded, and we were planning to leave at 7 a.m. But about an hour before we left, I got a call that Randy wasn’t feeling well.

“That’s the downside of working for entertainers, I guess,” he continued. “You develop great relationships with these folks, but it can quickly come to an end. Randy [Travis] is one of the greatest guys I’ve worked for. I love the man dearly.”

Fortunately for Hunter’s business, there is usually an entertainer in need of a truck driver.

“I do a lot of stuff on my own, but I’ve worked a lot for one of my heroes, Charlie Daniels,” he said. “He does a lot of charity work and is just a super person.”

While Hunter regularly drives for his “old staples,” including Charlie Daniels, the Oak Ridge Boys and more, he also occasionally signs on for a music superstar that transcends genres.

“Last year, I drove for Michael Bublé,” he said. “He had 20 trucks. And I’ve been talking to another performer who will have 40 trucks on tour.”

That’s a lot of equipment to be hauled. But even 40 trucks may not be enough in an era when concertgoers have come to expect laser light shows and hydraulic stages.

“I’ve heard of some entertainers who have a hundred trucks on tour,” Hunter said.

When driving for high-profile celebrities, drivers sometimes travel incognito, or they might pull visible trailers promoting the performers.

“When I drove for Randy [Travis], we had vinyl wraps on the trailer with picture of him and maybe the album he was promoting,” Hunter said. “Other performers don’t want a $10,000 wrap. With a group like the Oak Ridge Boys, I’ve had their logo on the side of the truck and back of the trailer.”

Hunter said entertainment drivers need to remember that when pulling into a truck stop, they are representing the performer. Performers treat drivers well and consider them vital to a successful tour. Hunter knows he has a standard to uphold beyond himself.

“There’s probably been a difference — and I don’t mean it in a bad way — when I compare myself to other drivers or when I’ve hauled typical freight,” Hunter said.

“You have to keep yourself clean and wear decent clothes. When you are working for the best, you have to realize they are playing before huge crowds because they are the best. You have to do your best to represent them,” he continued.

“When you’re out there at a truck stop, people don’t see you as a person but as a reflection of the artist you work for,” he said.

Of course, rabid fans will go to great lengths to get close to someone who is close to a performer they faithfully support.

“When I had the wrap for Randy Travis … oh my gosh!” Hunter said. “People would chase me into the bathroom and talk to me like I was him.”

Hunter recalls one time when he left a truck stop and could see lights all around him.

“I’m thinking, ‘What have I done?’” he said. “It turned out the lights were flashes from the cameras and phones of about 15 people taking photos of the truck.”

And the photos don’t stop when Hunter leaves a truck stop.

“I’ve gone around curves at night, and in my mirror I’ll see red lights,” he said. “I figured out it was cars behind me holding up their phones and taking pictures.”

Another difference about driving for entertainers compared to hauling standard freight is the pay and other bonuses that come along with the job.

“Maybe the pay is better,” Hunter said. “If you talk to a driver who gets so much per mile and tell him how I’m paid, he’ll turn around without really understanding. You might say entertainment drivers get a daily rate, but there’s a purpose for that.”

Meals and drinks are furnished, he said, and there are other savings typical OTR drivers don’t receive.

Hunter said the entertainment business never slows down in normal times. When one performer takes a break after a six-week tour, Hunter switches trailers and heads back out on the road with another entertainer. That’s another major difference between typical OTR drivers and those who drive for entertainers.

“A few years ago, I remember I was home 20 days out of the whole year,” Hunter said.

If Hunter is a reflection of the artists he works for, a schedule like that proves he has a high standard to uphold. And he has been doing just that for 30 years. 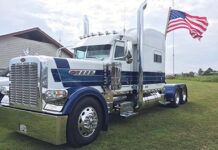 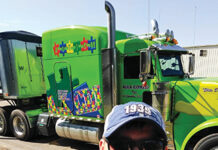