DES MOINES, Iowa – Mike Pennington has made quite the career for himself during his time with TMC Transportation. His 16 years of over-the-road driving have brought him great success, and he is a well-known name in not only the training department, but also throughout the company. Pennington has been selected as TMC’s Trainer of the Year for 2019.

His motivation to start training back in 2008 was simple: Pennington wanted to make a difference. “The success of TMC starts with our drivers, so I wanted to be a part of making sure new drivers are getting things done the right way,” he said.

As for the reason for his success, Pennington said he owes it all to his students. “I learn something from every new trainee that comes into my truck,” he added. “There are so many different personalities, and everyone has a different background and story. It’s been pretty amazing.”

The West Virginia native does his best to give a well-rounded approach in his training. “I stay up-to-date with the industry in general, along with everything our drivers need to know about TMC.” Bottom line, Mike does his best to be the person with all the answers to questions his trainees might have.

“Mike’s work ethic, safety and efficiency on the job are second to none, and he works hard to teach his trainees to work the same way,” said Pennington’s fleet manager, Pat Barr. “He makes sure they understand that their efforts are a direct link to their success.”

There is no doubt that Pennington is committed to his work. In fact, he mentioned that he doesn’t have much downtime, but that’s what he prefers. “If I do have any downtime or go home for the weekend, I just relax and get ready for the next week back out on the road,” he said.

Finally, the thing that Mike is most proud of is not his own success, but the success of his trainees. “I love hearing how well they are doing out on their own. It’s a great feeling and that’s how I know I’m doing my job right,” he said. 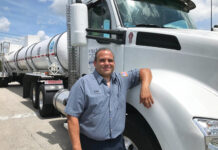