Long-awaited revisions to the hours of service (HOS) regulations were released on May 14 to mixed reviews. The changes, published in the Federal Register on June 1, will become effective on Sept. 29. The 120-day period before the ruling becomes effective allows time for training of enforcement agencies and updating of ELD equipment.

In announcing the ruling, Federal Motor Carrier Safety Administration (FMCSA) Acting Administrator Jim Mullen said: “The Department of Transportation and the Trump administration listened directly to the concerns of truckers seeking rules that are safer and have more flexibility—and we have acted. These updated hours of service rules are based on the thousands of comments we received from the American people. These reforms will improve safety on America’s roadways and strengthen the nation’s motor carrier industry.”

“America’s truckers are doing a heroic job keeping our supply chain open during this unprecedented time and this rule provides greater flexibility,” said U.S. Transportation Secretary Elaine C. Chao. “The DOT listened directly to the concerns of truckers seeking rules that are safer and more flexible and we have acted.”

The revisions having the greatest impact on most over-the-road drivers were a change to the required 30-minute break and a change to the method of splitting the 10-hour rest period into two segments. Also, the on-duty period for short-haul drivers was increased, as was the miles limit that defines “short-haul,” along with a change to the two-hour “adverse conditions” allowance.

The change to the rest period split is also larger than it may at first appear. Currently, the driver can split the rest period into two parts, one of which must be at least two hours long. The remaining hours must be spent in the sleeper berth. The two-hour period counts against the 14-hour day. Under the revised rule, the number of hours the driver is required to spend in the sleeper is reduced to seven. The shorter rest period, up to three hours, does NOT count against the 14-hour window. This will give the driver greater freedom in choosing when to rest, without penalizing driving time.

Another revision is the adverse driving conditions exemption. Currently, if adverse conditions, usually weather-related, occur that the driver didn’t know about when dispatched, he or she can continue driving for up to two additional hours to get to their destination or to a place of safety. Those extra two hours, however, had to be driven within the 14-hour window. Since the 14-hour window wasn’t extended, drivers often couldn’t take advantage of the extra driving hours. Under the revised rules, the 14-hour period is extended, up to 16-hours, if the two additional hours of driving are needed.

Finally, the short-haul exemption, excusing drivers from logging (ELD or paper) if they return to their home terminal and don’t exceed the area of a 100-air-mile radius, is changed to make the radius 150 miles. Further, the 12-hour work period is extended to 14 hours, matching their over-the-road counterparts. This exemption may benefit drivers of local routes that are home each night.

The 232-page FMCSA release contained the statement, “The flexibilities in this final rule are intended to allow drivers to shift their drive and work time to mitigate the impacts of certain variables (e.g., weather, traffic, detention times, etc.) and to take breaks without penalty when they need to rest.”

The announced changes were welcome news to those who had long fought for the revisions. TCA Vice President of Government Affairs David Heller commented, “TCA applauds the work of the FMCSA regarding the new hours of service regulations that will be effective this fall. This rule is a product of our industry’s dedication to data-driven decisions used to revise a regulation in order to provide our professional truck drivers an opportunity to be more flexible with their time in relation to how their day shapes up.”

Heller continued, “Communicating our industry’s need to incorporate greater flexibility into the rule, TCA is viewing the final rule as a positive start to a conversation that will continue to improve upon our industry’s safety record and demonstrate that data, derived from newly implemented technology, will continue to play a major role in how this rule evolves in the future.”

The Owner-Operator Independent Driver Association (OOIDA), whose petition to the FMCSA was credited in the final ruling with initiating the revision process, said in a May 15 letter to its membership, “Do we think the provisions are great? No. Do we think they are a step in the right direction? Absolutely.”

Kevin Steichen, president and co-founder of United States Trucking Alliance (USTA), thought it best to withhold judgment until fully reading the 232-page FMCSA release. “It’s a good start,” he said. “It does allow for a little more flexibility in how drivers use their hours. It’s a little early for anyone to be picking it apart. Knee-jerk reactions don’t get us anywhere.”

After the final ruling, opponents expressed their displeasure. In a Teamsters press release, General President Jimmy Hoffa said, “In an effort to increase so-called ‘flexibility’ for trucking companies, the FMCSA is abandoning safety and allowing drivers to push themselves to the limit even further.”

Joan Claybrook, chair of Citizens for Reliable and Safe Highways (CRASH) had this to say; “It’s no coincidence that this latest effort to expand hours of service began once truck companies and drivers were required in 2017 to objectively verify their driving time by using [ELDs] to ensure compliance with federal rules. We know that in the past, skirting the rules or falsifying hours of service records was common and widespread. Now that it is harder to do, segments of the industry have been clamoring to eviscerate hours of service limits and pushing dangerous changes like the ones issued today.”

No matter how the revisions are received, one thing is for certain – trucking regulations will continue to evolve along with the industry and the world it serves. 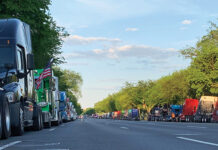 Mayday, mayday! A tale of two sides of a dispute over spot rates

Frustration over spot freight rates bottoming out due to the COVID-19 pandemic drew more than 100 small-business owner-operators to Washington, D.C., for a “May... 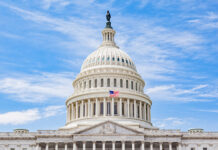 Will INVEST in America Act pause the clock on HOS revisions? 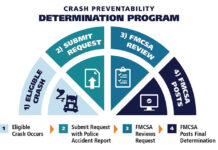 Lost amidst the excitement of the release of the new, more flexible hours of service rule, and the attention appropriately being given to the...