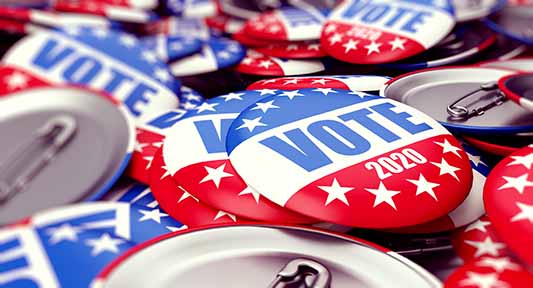 In the last edition of Truckload Authority, we highlighted four races for U.S. Senate seats that Democrats are hoping will enable them to take control of Congress in the November 3 election. While Democrats are working to hold onto the seats they have, they also need to oust at least four Republicans if they are to control the agenda in Washington in the coming years.

Republicans, while also fighting to hold onto Senate seats that have been dependable for many years, have their sights on some races they hope to turn from blue to red — enough to offset any potential losses.

In this edition, we offer a little insight into four more races that may be tipping points in the battle to control the Senate chamber.

A force in Texas politics since 1977, John Coryn is seeking reelection to a fourth term in the U.S. Senate. First elected in 2002, he is considered among the most reliable conservative voices in Washington.

M.J. Hegar is a political newcomer, a decorated U.S. Air Force pilot who served three tours in Afghanistan. She has championed opening military combat roles to female soldiers and highlights military service on her campaign website.

The Real Clear Politics (RCP) polling average indicates Coryn is holding a 10-point lead over Hegar, an average that has held since the Democratic runoff gave Hegar a slight boost. Still, based on the latest polling, 20% of voters remain undecided. Heading into the final weeks of the race, Coryn is standing by his conservative Senate voting record that has made him overwhelmingly popular among Texans, while Hegar is appealing to socially liberal voters, including Hispanics, which she hopes will carry her to victory based on the immigration plank in her platform.

After a 22-year military career, in 2014 Joni Ernst became the first female voted to represent Iowa in federal office. Unopposed in the 2020 Republican primary, Ernst is now battling for a second term against Democratic challenger Theresa Greenfield. Having lived her life on an Iowa farm and working as a single mother, Greenfield has the experience to resonate with fellow Iowans.

In the most recent polling data released by Spry Strategies, Greenfield holds a 2-point lead over Ernst with 12% of voters undecided. Numerous other polls conducted since early June have shown the race to be tight, with Greenfield consistently holding the same two-point edge.

If name recognition is important in political races, former Auburn University head football coach Tommy Tuberville would handily defeat most any resident of Alabama. Tuberville has taken a socially conservative agenda on the campaign trail.

Incumbent Doug Jones has been in the Senate since 2017 when he won a special election. Jones’ positions are generally socially liberal; however, the Birmingham News describes him as a “moderate Democrat,” noting his primary focus is on health care and the economy.

Business-leader-turned-Senator David Perdue arrived in the Senate in 2015 with promises to break the gridlock and offer change. Perdue has become known as a staunch supporter of President Trump and serves on Senate committees.

Recent polls show Perdue holding a 3- to 7-point lead over Ossoff, with RCP indicating a 5-point running average in favor of the incumbent.

Capitol recap: A review of important news out of the nation’s capital | March-April

The right dog for the road: Driver puts love, training into...