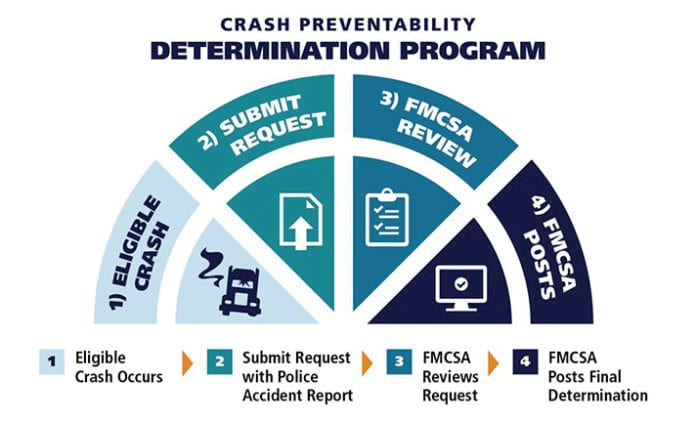 Lost amidst the excitement of the release of the new, more flexible hours of service rule, and the attention appropriately being given to the pandemic gripping the nation is this: 2020 is the 10th anniversary of the introduction of the Federal Motor Carrier Safety Administration’s Compliance, Safety, and Accountability (CSA) initiative and its Safety Measurement System (SMS).

Since that time, the FMCSA has used safety performance information in the Behavior Analysis and Safety Improvement Categories (BASICs) to prioritize carriers for safety interventions.

One of the BASICs is the Crash Indicator category which uses a motor carrier’s crashes from the previous 24 months to calculate percentiles for motor carriers.

Although the Crash Indicator BASIC percentiles have never been publicly available, trucking industry stakeholders have long expressed concern that the use of all crashes in SMS, without an indication of preventability, may give an inaccurate impression about the risk posed by the company, thus increasing the number of targeted compliance interventions and giving insurance companies more reasons to impose higher premiums.

In response to this concern, on July 27, 2017, the FMCSA announced a demonstration program to evaluate the preventability of certain categories of crashes.

Based on the results of the demonstration program, FMCSA in May announced it was initiating the Crash Preventability Determination Program (CPDP).

Through this program, motor carriers and drivers may submit eligible crashes for preventability determinations through FMCSA’s DataQs system.

“FMCSA’s Crash Preventability Determination Program is a prime example of the Agency listening to the concerns of the industry,” said Truckload Carriers Association Vice President of Government Affairs David Heller. “For years, we have communicated that accidents over which we have no control, or which have been determined to be non-preventable, should not be attributed to a carrier’s safety record.” Heller added  that it has even been noted that approximately 75% of the accidents involving a truck and passenger vehicle had been determined to be the fault of the passenger vehicle, yet the accident had a negative impact on the motor carrier’s CSA score.

“The CPDP is an opportunity for carriers to dispute the preventability of a questionable accident in order to more accurately depict their safety performance,” he said. “As an industry, we should not shy away from determining our safety fitness. However, we should insist that the determination be as accurate as possible. The CPDP certainly helps in portraying that.”

The highest number of RDRs submitted by one carrier was 287.

The overwhelmingly largest category of RDRs submitted (6,334) was for an accident when the commercial motor
vehicle (CMV) was struck in the rear. Eighty-three such accidents were determined to be preventable and no decision could be reached on 360.

There were 772 RDRs submitted for accidents when the CMV was struck while legally stopped or parked, including when the vehicle was unattended. Of those, 660 were determined not preventable, 21 preventable, and 41 were undecided.

Next came CMVs struck by a motorist driving under the influence (or related offense) with 688 RDRs submitted, and of those, 636 were determined to be not preventable, 16 preventable, and 36 were undecided.

The FMCSA said that on average, carriers with not preventable crashes removed have a percentile drop of nine points in the recalculated Crash Indicator BASIC.

Finally the determination program found that removing not preventable crashes from the Crash Indicator BASIC should not have an impact on the effectiveness of FMCSA’s prioritization programs.

The FMCSA pointed out that a crash preventability determination does not assign fault or legal liability for the crash.

The following crash types are eligible for participation in the program:

Struck in the rear type of crash when the commercial motor vehicle (CMV) was struck:

Wrong direction or illegal turns type of crash when the CMV was struck:

Parked or legally stopped type of crash when the CMV was struck:

Failure of the other vehicle to stop type of crash when the CMV was struck:

Under the influence type of crash when the CMV was struck:

Medical issues, falling asleep, or distracted driving type of crash when the CMV was struck:

Cargo/equipment/debris or infrastructure failure type of crash when the CMV:

Animal strike type of crash when the CMV:

Suicide type of crash when the CMV:

Rare or unusual type of crash when the CMV:

Learning to follow: Autonomous technology may be ready before the rules are

Sting of the pen: Biden wants to radically reshape how fossil fuels are collected, transported, and consumed