After a June increase, sales of Class 8 trucks on the U.S. market dropped sharply in July to the lowest level since February, according to data received from ACT Research. In July, 17,324 Class 8 trucks were sold, less than two-thirds the number sold in the same month of pre-pandemic 2019. July sales were down 14.9% from June but up 17% from July 2020.

Of the 17,324 units sold, 12,845 (74.1%) were road trucks equipped with fifth wheels for pulling trailers. The remaining 25.1% were vocational trucks destined for dump, trash or other purposes.

Sales numbers were only a part of the Class 8 story in July. A better picture of the market might be obtained from build rates, backlogs and inventories.

“The OEMs are just having such a hard time getting vehicles produced and vehicles to market,” said Kenny Vieth, president and senior analyst for ACT. “The retail sales numbers are somewhat reflected in production, but the sales numbers are actually good, relative to the production.”

Vieth explained that the U.S. portion of truck production was 12,600 units.

“We’d have to go back to February 2017 to find a lower non-COVID impacted production number,” he noted.

Production has been stymied for months by a lack of critical parts and supplies, but which are the hardest to come by?

“I think the answer is everything, but specifically, it’s coming down to semiconductors,” Vieth said. “In the first half of the year, the OEMs were able to cannibalize the aftermarket parts stream to find some additional components. I think those supplies have been largely consumed at this point.”

Because vehicle manufacturers use so many semiconductors, they may have been able to use their buying power to corral supplies of chips still on the market, but that supply is dwindling.

When production is down, OEMs can compensate by selling trucks that are already built and sitting in inventory at dealers and other locations. Some of those are built specifically for certain applications and may not be exactly what buyers are looking for — but they sell when nothing else is available.

At this point, however, inventories are too low to provide much of a boost to sales numbers. In July, according to ACT, the U.S. inventory was down to 31,900 trucks.

“December 2013 was the last time we saw a U.S. Class 8 inventory number as low as July’s,” Vieth said. “The problem, of course, is that the industry has been living off of inventory somewhat, but that’s kind of running out as an option.”

While an inventory of 31,900 trucks may seem like plenty, the majority of those trucks aren’t available to be sold. Many of them are in the dealer prep stage, already pledged to a buyer but not yet turned over. Others are vocational trucks waiting for installation of wet kits, dump, trash or concrete bodies before final delivery. They count as inventory, but they aren’t available.

Trucks that are available may have unpopular specs that are hard to move. For example, a truck designed for the logging industry might have a heavy double frame, large wheels and a big, fuel-consuming engine, specs not in demand for over-the-road use.

“If you’ve got a truck on a dealer lot that’s been sitting there for more than two months, you know it has some really weird specs,” Vieth remarked.

The backlog for new Class 8 trucks grew larger in July. At current build rates, it would take 18 months to build the 229,000 trucks currently on order on the North American market. A year ago, that backlog sat at a mere 80,000 trucks.

Those thinking of turning to the used truck market will likely be disappointed. Inventories are low in that area, due to both buyers looking for equipment they can’t find on the new truck market and a lack of trades from buyers who can’t get new trucks delivered fast enough.

Used trucks, when available, are selling for premium prices.

Labor is an issue for truck manufacturers, too. A labor strike at Volvo’s New River Valley plant in Dublin, Virginia, couldn’t have helped production, but most of the labor problems faced by the OEMs aren’t happening on the assembly lines. Suppliers are having difficulty getting enough workers.

“The lower you go on the supply chain, pay becomes an issue as well,” said Vieth. “And you also add extended unemployment benefits on top of COVID, and workers are hard to come by.”

The situation isn’t likely to change any time soon.

“It’s hard to see a short-term rebound,” Vieth remarked. “Though I will say, our understanding is there’s a lot of red-tagged trucks, trucks that are sitting around factories, waiting for semiconductors or an instrument cluster or window actuators.”

Numbers aren’t available, but it makes sense that OEMs would build trucks that are mostly complete and can be quickly finished and sold when missing parts become available.

Individual OEMs had mixed results in July, according to data received from Wards Intelligence. Volvo, impacted by the UAW strike, saw the largest drop in sales, moving only 888 Class 8 units. That number represents a 39.7% decline from June sales of 1,472. It was the company’s worst sales month since January 2012, and the worst July since the “Great Recession” of 2009.

Freight rates remain high, but finding trucks to haul it is an ongoing problem. 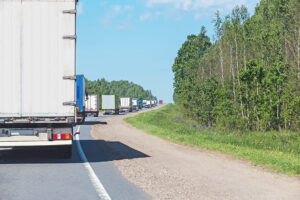 The law of supply and demand: Good times continue for trucking, but could be slowing 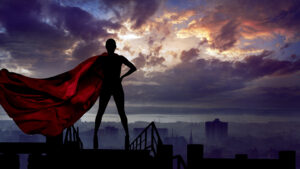 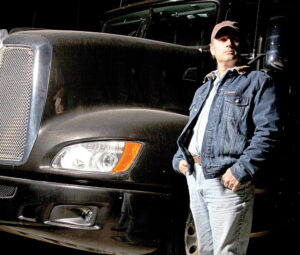 Personal safety: Preparation and awareness are key to protecting yourself on the road 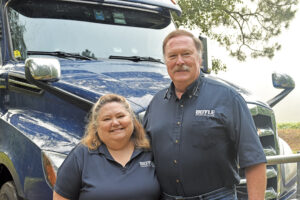 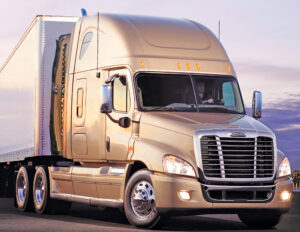