For an over-the-road driver, there’s rarely a day without a route that passes through least one construction zone. Most drivers accept that dealing with construction is just part of a day’s work — just an annoyance to deal with. Most drivers know to pay closer attention when they see the orange barrels, cones and signs.

Construction zones, however, can represent the most hazardous part of a driver’s day.

In some cases, drivers can identify work zones in advance and route themselves on another road. Unless you have a source providing the latest construction information, however, it’s difficult to predict every construction area you’ll come to. Smaller projects, such as county crews working on guard rails or trash collection teams may not publish any warning at all.

Some hazards, such as damage from an accident or a weather-related issue such as a landslide can result in unpredictable lane closures.

Construction zones can be anywhere.

Another consideration every driver deals with is transit time. It makes no sense to add an hour to your trip taking a detour when navigating the construction zone will take far less time.

Nearly every driver can recount times when the signs leading up to a construction zone were confusing. In fact, some are completely inaccurate, for example, signs indicating that the left lane is closed ahead fail to mention that there are actually three lanes are closed. In the worst situations, signs may indicate the left lane is closing when, in fact, it’s the right lane.

Experienced drivers know to look far ahead and be ready for anything.

Many construction zones result in long traffic backups, and there are always a handful of motorists who think they’ll gain time if they can get ahead in the line. It’s common to see drivers changing lanes frequently, trying to find the one that’s moving just a little faster. Some drivers even ride the shoulder if the road, trying to force their way into traffic farther ahead.

The end result is that these drivers increase the risk of accidents for everyone in the area.

Then, there are hazardous conditions and new traffic patterns created by work crews. Lanes can be narrow and curve sharply as traffic is routed around construction obstacles. Differences in pavement height can result in drop-offs that can suddenly tilt your vehicle to one side or the other.

However, the biggest issue in construction zones for most drivers is, quite simply, other traffic.

Motorists who don’t want to get trapped behind a big truck through a construction zone may take unreasonable risks trying to get ahead, including trying to pass in an unsafe area or waiting too long to merge. Even when lanes are marked with solid white lines — indicating that lane changes are unlawful — some motorists will weave in and out of traffic, trying to achieve just a few more miles per hour.

Monitoring your blind spots can be critical in these situations. Reduced lane width can bring adjoining vehicles closer, putting them in an area that’s extremely hard to see from the cab of the truck. Four-wheelers jockeying for position often change lanes rapidly, disappearing from view as they move.

Waiting in a long line of traffic for a construction zone can be a frustrating experience for everyone. If you move to the correct lane far in advance, it can be frustrating to watch smaller vehicles repay your politeness by passing your truck and quickly merging in front of you.

Oddly enough, traffic engineers have concluded that the most efficient way to merge lanes together is for everyone to stay in their lane until just before the construction zone. Traffic then takes turns moving to the correct lane in a maneuver known as the “zipper.” Most state departments of transportation advise this method of merging, and some even have signs directing motorists to a “zipper zone.”

A YouTube video published by the Colorado Department of Transportation advises drivers to “Just wait. Use both lanes. Take turns. Merge late.”

Of course, waiting to merge a tractor-trailer at the last minute, especially when shifting to the right, can be an exercise in frustration if other motorists aren’t keen on taking turns.

No matter how you merge, be aware of changing road conditions and other motorists. You’ll need to keep your eyes moving constantly to avoid missing something.

Speed limits are usually reduced in construction zones, so it’s important to pay close attention to road signs. Slower speeds allow more time to react to hazards and could mean the difference between an accident and a safe trip through the zone.

Road surfaces can be tricky in construction zones, especially during inclement weather. While the finished roadway may be constructed to allow water to run off quickly, the temporary pavement in a construction zone may not have the same ability. Standing water can collect in the driving lane, and can freeze in winter months.

Additionally, dust, dirt and gravel on the road surface can cause a loss of traction. Slower speeds can help you deal with less than perfect traction conditions.

Another common hazard in construction zones is reduced visibility.

Dust and dirt stirred up by construction equipment can drift across the roadway, obscuring visibility. At night, lighting used by workers can be angled to create a blinding glare at the worst possible time. In addition, as traffic gets more congested, larger vehicles in front can block large areas of your field of vision.

Allowing increased following distance is always a good idea in construction zones. As traffic slows, the tendency is to close up the gaps — but the likelihood of a vehicle in front of you suddenly stopping increases as they deal with hazards you may not be able to see yet. 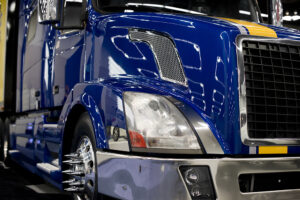