In his 17-year driving career, native New Yorker Milo Moore has seen a little bit of everything, both on the highway and in his experience with various employers. He even took a turn being his own boss for a stretch, an experiment that showed him how difficult it is to make a living as an owner-operator.

But the past five years have been particularly instructive for Moore, revealing to him how much more enjoyable a job is with the right employer.

“My business didn’t succeed, and I needed a job,” he said. “I applied everywhere, and I had three options with different companies. I used to run brokered loads for Virginia Transportation, and I thought it would be a good fit. They exceeded my expectations. At first, I thought I wouldn’t be here long, but I’m going to retire here.”

Moore, 35, said other than the usual requirements of pay and benefits, his employer also has other, more subtle, attributes that he appreciates. Being given the opportunity to formally share his years of trucking knowledge with the next generation of drivers is one of those things.

“Virginia Transportation asked me to mentor new hires and existing employees, and I did that for two years,” he said. “They asked me to train a few guys, and they turned out to be excellent haulers. I can’t say enough about this company. Anywhere you want to go, they’ll let you go in your career.”

Moore, who lives in Florida, hauls autos for the Rhode Island-based Virginia Transportation, a gig that has taken him all over the lower 48 states and into Canada.

He said he got a taste of the work early in life — sort of.

“Growing up, my dad was a police officer and worked part-time for a towing company,” he said. “I would ride around in the tow truck as a kid, and loved it. At 14, I got a job at that towing company. I started washing cars, then taking care of the tow trucks. After I got my license, they let me start towing a bit, and kept going from there. I got my Class A (CDL) the day I turned 21.” 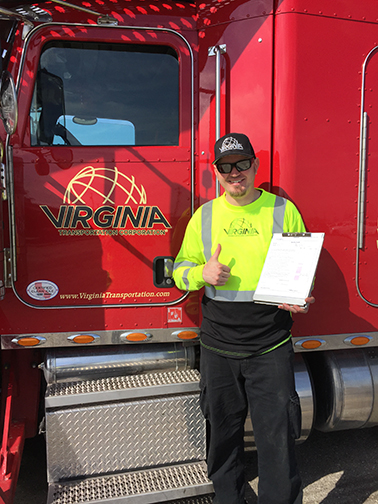 Moore loved the job and the freedom of driving, but just like any newcomer, he had his share of dues to pay.

“You watch the senior guys, and they make it look easy, so you try to mimic that,” he said. “That speed comes with time. Anyone who tells you they haven’t damaged cargo in their career is lying to you. You learn by screwing up, and you hope the screw-ups are minimal.”

As time went on, the work got smoother and the routes got longer, from an initial territory across the tri-state New York/New Jersey/Connecticut area to long-distance hauls to California.

“I started venturing out to the West Coast when we got a contract with Enterprise,” he said. “I was bringing Priuses to California and Mustangs and Camaros back east because they were worth more on their respective coasts. Until about 2014, I never left the Northeast. Now I love the longer trips.”

Those hauls have a downside, Moore admits — all that time away from home. Distance between himself and his wife and two kids is a sting neither time nor experience has dulled.

“It’s tough being away. Every night I make a point to call my kids. I’ve missed so much, and I’ll never get it back, but you try and be there for the biggest stuff,” he said. “At the same time, with this job you have to put everything in your back pocket and focus on what you’re doing, because so much can go wrong out here so quickly. Your main focus is trying to get home.”

At this, Moore brings the conversation full circle, saying many of the difficulties of the job can be made more bearable with the support of a good employer. He says that on every level, that’s what he’s found in Virginia Transportation.

“I tell the younger guys, you want to look for a company that has the three main things you need — good equipment, wages and benefits,” he said. “The level that Virginia [Transportation] keeps their equipment at … I don’t think we have trucks older than three or four years old. We’re constantly getting the newest equipment, and that makes life easier. They make a point to get the safest equipment as well.”

Of course, there’s more to being a good employer than just making sure the equipment is top-notch, Moore noted.

“And benefits, a lot of younger guys don’t worry about benefits, but they should,” he continued. “We have full health care, retirement, all of it.”

Moore said 2020, with the onset of the COVID-19 pandemic, revealed the character of many trucking companies in how they took care of their drivers during an incredibly challenging period.

“What [Virginia Transportation] did for us during the pandemic, no one else did in the industry,” he said. “There were guys at other companies that got laid off well into 2021. A lot of our guys got furloughed, but about 30% of our fleet never stopped working. And they paid our medical benefits for the entire time we (did have to stop) working.”

Virginia Transportation worked hard to provide work for as many drivers as possible. “When the freight slowed down, I was like ‘All right, I’ve been out for a little over a month. I’m going home.’ I went home for a week — and the day my week was up, they got a huge job,” Moore said. “We moved 30,000 rental cars for Enterprise and Hertz from Florida to Atlanta Motor Speedway because no one was renting cars. Normally, 60% of their fleet is out on the street at any given time, so they had nowhere for these cars to go. We did that all summer last year.”

As his career has unfolded, Moore said he rarely misses the chance to extoll the benefits of the trucking industry to the next generation. Nearly 20 years and over 1.5 million miles in, he still gets a thrill out of what he does.

“With Virginia [Transportation] I could be anywhere in the lower 48 or in the four provinces in Canada any day. I go everywhere,” he said. “I like the Southwest. I really enjoy those 11 Western states; it’s wide open and beautiful. It’s a different world out there.”

Every driver has a story to tell, and that story just might encourage someone else to discover a career in trucking. And sometimes, all it takes is a honk of the horn.

“I’m just one person in the grand scheme of it all, but when you can influence a kid, that’s great. You always see these kids on the city streets and they’re pumping their arm to blow the horn. It’s cool putting smiles on their faces,” Moore said. “I take a lot of pride in getting compliments in how I take care of my truck too. I’ve had women come up with their kids, and they think the truck is the coolest. You just let them look at it and answer any questions they have. I really get a kick out of that.” 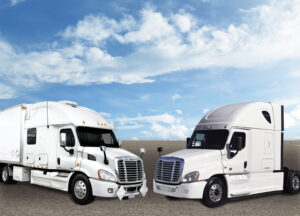 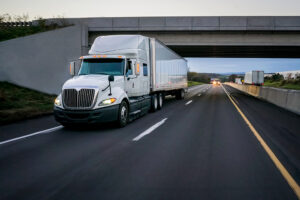 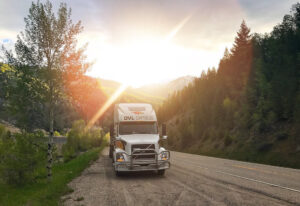 Excellent article. Well-written. A great example to emulate for a writing freelancer like myself.