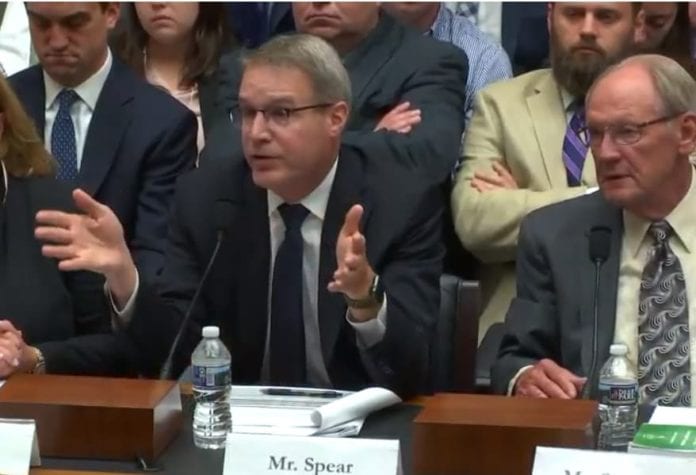 ATA President and CEO Chris Spear, left, told a House panel that ATA wanted to work with lawmakers as they begin work on a transportation reauthorization bill. Seated beside Spear is OOIDA President Todd Spencer. (Courtesy: HOUSE OF REPRESENTATIVES)

WASHINGTON — American Trucking Associations President and CEO Chris Spear Wednesday told members of a House Transportation and Infrastructure subcommittee the ATA is committed to working with lawmakers as they begin work on a transportation reauthorization bill.

Meanwhile, Todd Spencer, president of the Owner-Operator Independent Drivers Association told the committee that the state of the American trucking industry is “broken.”

The two executives were among several witness who spoke during the hearing — dubbed as “Under Pressure: The State of Trucking in America” — before the Subcommittee on Highways and Transit.

“ATA pledges to help this subcommittee write legislation that takes into consideration the state and future of the trucking industry, looking beyond the hood – 5, 10, 15 years out – and how we can improve safety through innovation; how we can grow a diverse, well-trained workforce that shores up the very real and well-documented shortage of talent; how trucking can generate and invest real money into our decaying infrastructure; and, how trucking can help you shape free and fair trade agreements that make the United States the strongest economy in the world.”

In his testimony, Spear said the industry is committed to safety on the nation’s highways, and to the deployment of proven technologies that will make the roads safer.

“Safety anchors the very foundation of the trucking industry, shaping our core values and decision making,” he said. “That is why the trucking industry invests approximately $10 billion annually in safety initiatives, including onboard technologies such as electronic logging devices, collision avoidance systems and video-event recorders.

“These investments also include driver safety training, driver safety incentive pay and compliance with safety regulations,” Spear said, “and while some of these investments are made to meet a myriad of regulatory requirements, many of them are voluntary, progressive safety initiatives adopted by our members and they’re paying dividends in highway safety.”

Spencer shared in his testimony concerns about the lack of driver training, truck parking shortage, excessive detention time and over-regulation.

He said that trucking is broken, but certainly not beyond repair, and that the most critical components are the drivers.

“Large motor carriers are pressuring Congress to enact unsafe policies to combat a fictitious driver shortage, while doing nothing to address their precariously high turnover rates. The American economy is stronger than it has been in years, but many drivers are still struggling to make ends meet,” Spencer said.

The association has long sought ways to address one of the biggest inefficiencies in the industry which is excessive detention, a problem that makes it difficult for drivers to earn a living since they are typically paid by the mile and not by the hour.

Spencer said OOIDA also supports robust training standards for new entrants, including behind-the-wheel experience. Spencer will also label the driver shortage as a myth, pointing toward high turnover rates among large motor carriers as one of the industry’s most pressing problems.