POMONA, Ca. — Ahmed Shaaban made his way to pick up a load in an area of California he’d never been to before. Two firsts happened in his 7-year career as an owner-operator for Slingshot Trucking, on Tuesday, April 6. Oddly, his load was already picked up when he arrived, and he picked up an unexpected second load — aiding in the arrest of a murder suspect.

Shaaban was driving through the city, chatting with a friend on his headset, when he saw the police pursuit. Shaaban mentioned to his friend the police pursuit had about 50 police cars chasing a dark gray truck.

The friend, familiar with the area, told him it was a murder suspect.

“Hold on,” Shaaban told his friend. “I’m going to try something.”

Shaaban went in a few circles, driving around a gas station, in hopes of positioning his truck in front of the gray truck.

“I wanted to block the whole intersection so he can stop and get caught,” he said. “Then, I see him gunning his truck to his right to go around me. So, I’m like, ‘Hell no,’ and pull forward my truck. I hit him.”

Shaaban said his intention was for the suspect to stop as he blocked the chase at the intersection of Holt and San Antonio avenues. Identified as Michael Caleb Reed, 35, the suspect had led the police pursuit through four counties for two hours before he encountered Shaaban.

Reed is a suspect in the shooting of a 40-year-old man in Oildale, California, according to the Los Angeles Times. He is currently being held in Kern County Jail facing multiple charges of reckless evasion of a police officer, carjacking and violating parole.

The damage to Reed’s vehicle was significant, according to Shaaban. Both airbags popped out, and the hood of his truck was crushed.

The full extent of the damage to Shaaban’s truck is yet to be determined. While the damage does not seem to be significant, he said damage to the frame is a concern because it looks twisted.

Shaaban’s truck is dedicated to his mother, Yousria. His mother’s name and her birth year 1948 are both proudly displayed on the truck as a tribute.

While waiting for the details regarding the coverage of the damage to his truck, Shaaban has set up a GoFundMe page.

“To the insurance, I’m just a number,” he said. “And if I’m intentionally doing it (causing the accident), they can say a lot of things, like I’m trying to get a truck, to get aid, whatever they can think … I’ve always owned my own business and I see how they work, so it’s a big concern for me, of course.” 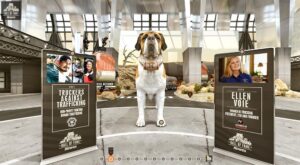 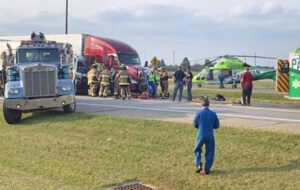 Law enforcement should replace his truck, outstanding citizens fund should be set up for events just like this. What a guy.

No matter whats going on in this world,good or bad.
We are still so blessed to have a country that come together in a time of need…NO MATTER WHAT RACE YOUR ARE..GOD BLESS OUR COUNTRY AND US ALL…..

Fantastic! Good to see there are still good people in our nation to do the right thing, when the power is in your hand to do so.

So interesting to hear Mr. Shaaban’s account of his heroic action. He stopped the cold-blooded murderer of our beloved friend Michael Lewis of Oildale. I’m happy to hear they surpassed their go fund me goal. God bless you Mr Shaaban. You are a hero to us.

Great story and a blessed American trucker. Thank you for stepping up and stepping on that criminal!

What a brave heart. God bless you Shaban.

As it plainly shows how UNGRATEFUL LAW ENFORCEMENT CAN BE, I would Never use my personal vehicle to assist them. The bare minimum to be expected would be to replace or repair this drivers tractor since this man chose to assist in the apprehension of such a FELON. It just goes to show , mind your own business.

As a trucker I would’ve done the same. If everyone “just minded their own business” more people could’ve died. Better a busted truck then busted lives

Don’t get involved in these things. A lot of these car chases involve someone looking at a lot of prison time. They will do anything to to avoid a long, long stretch in the pokey. They can be the most dangerous person you’ll ever meet: someone with nothing to lose.