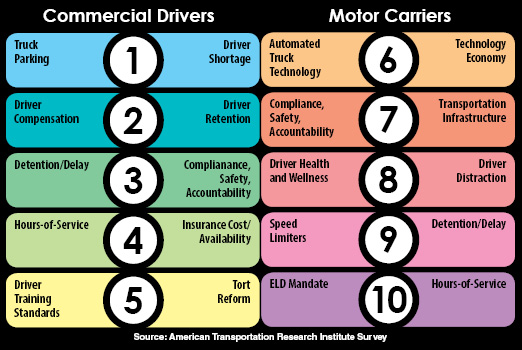 Each October, as an annual rite of passage and a barometer of the operational and financial aspects of the trucking industry, motor carrier executives eagerly await the release of the American Transportation Research Institute’s (ATRI) Top Industry Issues (TII).

The report is always “an eye-opener,” said Cargo Transporters’ Vice President of Safety and incoming chairman of the ATRI Research Advisory Committee, Shawn Brown. The committee helps set the annual agenda for the institute’s research initiatives.

On the other hand, the results of the 2020 report might lead some to say the industry has turned a blind eye to the No. 1 issue for the past four years — the lack of qualified drivers in the industry.

More than 3,100 industry stakeholders took part in the 2020 survey. Of those, 43.9% were motor carrier personnel, 32.2% were commercial drivers, and 23.9% were other industry stakeholders, including suppliers, driver trainers, and law enforcement. Top concerns of both segments are combined for the overall list. The report sets forth the groundwork of the analysis with a reminder that responses reflect a trucking industry operating in a year that was the “most chaotic and unpredictable time period in many decades.”

The big three: the trucking industry’s most pressing concerns

Overall, respondents to the survey collectively ranked the following as the top three issues:

The high ranking of these issues is not a surprise; much of the industry’s media coverage continues to focus on these concerns. The dynamics within the statistics are what make the 2020 TII an eye-opening study.

Not only did the driver shortage rank as the No. 1 issue, it outdistanced driver compensation by about 7%. While the lack of drivers continues to be an industry trend, Brown suggested the 2020 ranking partially grew out of efforts to increase safety.

“The Federal Motor Carrier Safety Administration’s Drug and Alcohol Clearinghouse has placed more visibility — rightfully so — on substance abuse,” he shared. “The results took some CDL drivers off the roads and the highways are safer for it.”

“Some” doesn’t accurately the number of drivers the clearinghouse has taken off the road, said the Truckload Carriers Association’s Vice President of Government Affairs David Heller.

While it does make the roads safer, it definitely contributes to the shortage.

Since the Clearinghouse opened January 6, 2019, some 42,000 CDL holders have tested positive for alcohol or drug substance abuse and have been listed in the clearinghouse database.

Of those, some 29,000 have not begun the return-to-duty (RTD) process, which requires abuse counseling and testing before a driver can earn back his or her CDL.

Brown said that the lack of drivers results from the difficulties inherent in the job. “In an over-the-road company, the drivers are gone multiple nights each week away from their families,” said Brown.

But carriers are not ignoring the problem.

“Many companies are changing lanes of travel and working to create more ‘point-to-point’ relay type runs,” added Brown, noting that these changes offer drivers more home time. On a less optimistic note, he said the industry has learned no “magic bullet” exists to increase the number of people who consider truck driving as a career.

The TII analysis lists strategies to improve each of the issues.

“These strategies can prove fruitful to our industry if implemented properly,” said Brown.

When asked to address the issue of driver retention (No. 6 on the TII list), in the face of the top-ranking and seemingly directly related issues of the driver shortage and compensation, Brown said it’s a matter of timing.

One strategy to address driver retention is to study truck driver pay in comparison to “competing occupations.” People employed as drivers, as well as their families, might question if the dynamics involved in the occupation can be fairly compared to any other job. Brown thinks the analysis is possible, suggesting that emergency services personnel who work rotating 24/7 shifts and spend nights away from home work under similar conditions.

Another strategy posed in terms of driver retention is to research the effectiveness of existing carrier retention programs.

When comparing the rankings of drivers to those of motor carrier personnel on the issues presented, drivers do not include either of the carriers’ top two issues — driver shortage or driver retention — in their top 10.

The relationship between issues is a matter of perspective, he said.

Truck parking tops driver concerns, while not top of mind for carriers

A startling finding of the 2020 TII survey comes in relation to truck parking. Commercial drivers ranked finding safe parking as the No. 1 issue they face. On the other hand, carriers didn’t consider it a top 10 issue. Many who review the results of the survey will be surprised at the apparent lack of concern of carriers for parking, and Brown is surprised as well.

How can an issue that doesn’t appear on the driver list (driver shortage) or the motor carrier list (truck parking and driver compensation) wind up No. 1, No. 2, and No. 3 respectively? Because of the number of respondents in each segment who ranked those issues No. 1 and No. 2, said ATRI President and COO Rebecca Brewster.

Can agreeing to disagree be a successful strategy?

Brown believes the difference of opinion is not new, but it is more obvious in this year’s survey.

“I feel that over time, no matter how different the responses are between the carriers and drivers, we as carriers need to pay close attention to the driver survey response rankings,” shared Brown, adding that carriers need to view drivers as customers just as much as shippers and receivers.

“A mentor of mine has said for many years that we must listen to our drivers,” noted Brown.

Sometimes hearing the issues drivers face is a challenge, but Brown added that listening to concerns helps carriers better serve the needs of their drivers, which enables them to become better companies.

“Ultimately it is my feeling that over time, the driver survey responses will create a shift and somewhat steer the direction of carrier responses as well,” added Brown.

‘Diversity, equity, and inclusion’ encompass much more than race — and can lay a strong foundation for a company’s success

Safety on the road: Driver health, safety, and security combine to provide a thriving industry