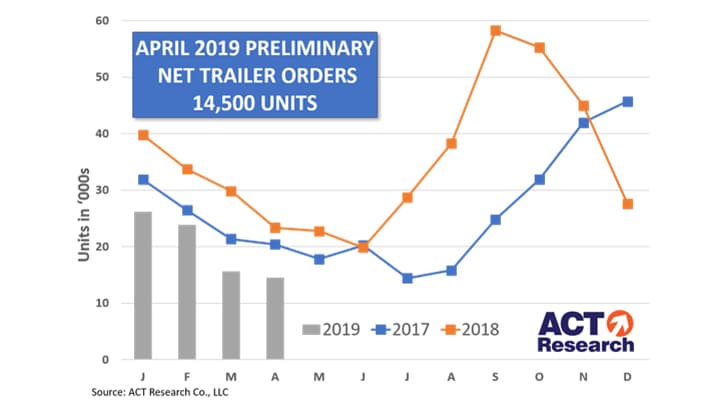 Final volume will be available later this month. ACT’s methodology allows the company to generate a preliminary estimate of the market that should be within +/- 3% of the final order tally.

“Order volume was soft in April for the second straight month. Several factors appear to be in play. OEMs continue to be reticent to fully open 2020 orderboards. This is evident in our measurement of the extent of the industry’s backlog, which has remained in the November or December timeframe throughout the first four months of 2019,” said Frank Maly, ACT’s director of CV transportation analysis and research. “While we hear comments of some fleets anxiously awaiting the chance to snap up 2020 build slots, some also appear to be evaluating their existing commitments. Cancellations in April were the highest since August 2016 on both a unit and percent of backlog basis, and have remained elevated since December. That resulted in an interesting dichotomy in April orders; while new orders were actually up versus March, cancellations were significant enough to pull the net order number into the red month-over-month.”

Maly said while down slightly from March, production continues at a brisk pace, although material/component availability and staffing continue to challenge OEMs. Seasonal patterns actually called for a slight increase for April production, so that small sequential decline likely confirms the impact of the aforementioned headwinds.

ACT Research is a publisher of commercial vehicle truck, trailer, and bus industry data, market analysis and forecasting services for the North American and China markets.

ACT’s analytical services are used by all major North American truck and trailer manufacturers and their suppliers, as well as banking and investment companies.