Home The Nation Lane Departures: Recent sleep study should be a wake-up call for drivers 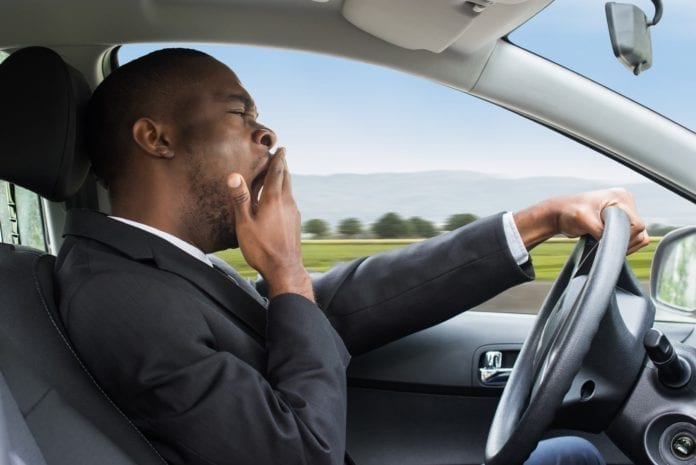 According to a survey to Ball State University, more than one-third of working adults are functioning while sleep-deprived. Not a comforting thought when you're on a crowded highway.

It’s funny how coincidences can almost make life feel like it’s scripted, or it’s like in that Jim Carrey movie, “The Truman Show,” where everything is conveniently placed in front of you by some unseen director.

In the long-running hit that is my life, this is one of those weeks that come along every so often that I imagine everyone can relate to. You’re so busy you feel like the only way you can get through it is just to put your head down and run with the ball, mission-focused, and just keep moving forward. There’s no time to relax, and no time to whine about it. Just eat what you can, when you can and burn the candle at both ends until you get ’er done.

During stretches like these, sleep winds up being one of the luxuries to be jettisoned.

So, yesterday morning, as I’m on my fourth cup of coffee and still only feeling like I’m breaking even, what shows up in my daily torrent of emails as I search for stuff to write about? Why, it’s a press release about a study that says Americans are growing ever more sleep deprived.

Well, there’s a shocker for ya. “Boy, I’d sure like to have a job where I can spend a lot of time collecting information so I can tell people something that’s obvious,” I said to myself.

While the main premise of the study, that people don’t get enough sleep nowadays, is worth a resounding “no kidding,” it was the details included in the press release that made it interesting. To raise the odds that they would get my attention, the folks who sent the press release emphasized that the study had found that professional truck drivers are among the most sleep-deprived groups of all.

The study, titled “Short Sleep Duration in Working Adults,” which had been conducted by a team at Ball State University, had just been published in the Journal of Community Health. The study looked at more than 150,000 working adults from 2010 to 2018 and found that in that span the number of respondents who reported regularly getting an inadequate amount of sleep — that is, seven hours or less — increased from 30.9% to 35.6%.

The study broke down the findings several different ways to see which groups were the most sleep-deprived. No matter how they sliced it, it looks like everyone is getting less sleep than they used to. According to the study, women had it worse off than men in 2010, by a margin of 31.2% to 30.5%. In 2018, the figures rose to 35.8% for women, 35.5% for men. Hey, look, guys, you’re catching up.

You know, it just occurred to me, I wonder if sleeping with a snorer has anything to do with it. Honey, if you’re reading this, I have no idea why this popped into my head.

As one would guess, those who are in professions that have irregular schedules and/or work in shifts have the highest proportions of sleepy workers. The worst was police and military, of whom fully half were found to be sleep-deprived. There’s a comforting thought.

Then came a category called “transport and material moving,” at 41%. Transport … that’s you, truckers …

Hang on, I need to refresh my coffee …

OK, where was I? Oh yeah. Jagdish Khubchandani, the lead author of the study, wrote that there is no single reason that can explain why American workers are sleeping less. People are working longer hours, he said, and a lot workplaces have gotten a lot more stressful. He also said you can’t discount the effect of all the time people spend on their electronic devices. It gets them all worked up during the day and at night they can’t set them down.

One thing that is for certain, Khubchandani said, it’s having a toll on people’s mental and physical health. Inadequate sleep, he pointed out, can contribute to several chronic diseases, and even to premature death.

For a truck driver, it doesn’t take a lot of daydreaming to picture how going through the day bleary-eyed could lead to premature death.

One of the takeaways from the study that shouldn’t be overlooked is that at any given moment that you’re on the road, more than one out of every three vehicles around you is being driven by someone who could use a nap.

I used to have a friend who liked to say, “The best way to help poor people is not to be one yourself.” You could apply that sentiment here. There’s nothing you can do to get those other people to catch 40 winks, but if you’re bright-eyed and bushy-tailed whenever you get behind the wheel, you’ll be better equipped to protect yourself when they start nodding off.

It’s something worth thinking about, but don’t lose sleep over it.