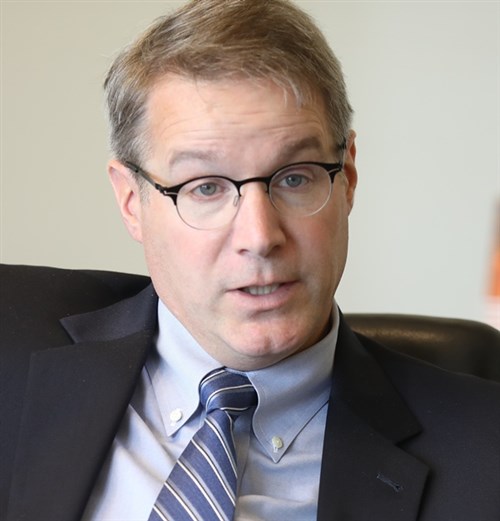 by THE TRUCKER STAFF

“Your story is now being told to the highest levels of government, to the media and to the American people,” Spear said in his annual State of the Industry address. “Together we are building trucking’s future.”

Spear pointed to victory in securing permanent Hours of Service reform, a higher profile for ATA on autonomous vehicle issues, withdrawal of rigid sleep apnea rules and stalling of a poorly crafted speed-limiter rule as significant triumphs for the industry that were the result of the federation’s elevated profile.

“We earned that victory,” Spear said of the HOS win. “You helped make that happen, and this win serves as a reminder to each of us, of the sheer strength of this association when we work together.”

Spear’s HOS remarks were in reference to what he called the “ill-conceived” restart rule that required two consecutive 1 a.m. to 5 a.m. off-duty time periods.

In addition, the restart could only be used once every seven days.

Obama’s action returned the restart rule to its original requirement that set on limit on the frequency of a restart and didn’t require the two 1 a.m. to 5 a.m. time periods.

“Last December, Congress passed and President Obama signed legislation that permanently struck his own administration’s ill-conceived, special interest-driven HOS rule. We earned that victory. You helped make that happen. And this win serves as a reminder to each of us, the sheer strength of this association, when we work together.”

ATA’s strength, Spear said, was on display when the association put two trucks on the South Lawn of the White House in March, and again earlier this month joining President Trump in Pennsylvania to support a tax reform plan “with one very special benefactor … trucking.”

“ATA has put its own members in a position to shape public policy at the highest level,” he said. “And with the president now championing our best interests, the entire nation is paying attention to what we have to say.”

Spear said with the nation paying attention to ATA, the association would continue to advocate policies “that produce measurable benefits to our industry, our customers and the general public,” specifically calling out federal preemption of state-level meal and rest break rules as “an issue we have to win and we will …,” and the coming implementation of the electronic logging device mandate in December.

“This issue has been legislated, promulgated and litigated,” he said. “It is now time to move forward. ELD technology removes one’s ability to exceed the legal hours of services, ushering in a safe, efficient and fair playing field for the nation’s trucking industry.”

Spear also said ATA would take a new leadership role in addressing a persistent issue in trucking: the driver shortage.

“Our industry faces several barriers that must be addressed if we’re to grow, including: establishing pre-apprenticeship and apprenticeship training programs, and hiring and training 18-21 year-olds. We need interstate recognition of credentials, entry-level training standards for veterans and nonveteran employees, solutions for the impact of detention time and congestion on drivers’ hours of service, and more,” he said.

To address these issues, Spear announced the creation of a new Workforce Development subcommittee to be chaired by ATA Secretary John Smith, chairman of CRST International Inc.

“This subcommittee will enable ATA to work closely with this Administration, Congress and state governments to solve this problem,” he said.

Finally, Spear again called for unity in the trucking industry, even in the face increasing anti-truck sentiment.

“Back in Washington, anti-truck and amateur hour advocacy groups believe they know what’s best for our industry. This wave of special interests has built a cottage industry fueled by ideology, emotion and misguided narratives – all intended to divide our industry and this association. Obstruction is their weapon of choice,” he said. “Rest assured, ATA will not be driven into this rut, nor allow such division to impede our ability to win. Our focus will remain on safety, sound data, the truth… doing what’s best for our industry and the country, not what’s good for a political party or one’s personal agenda.”