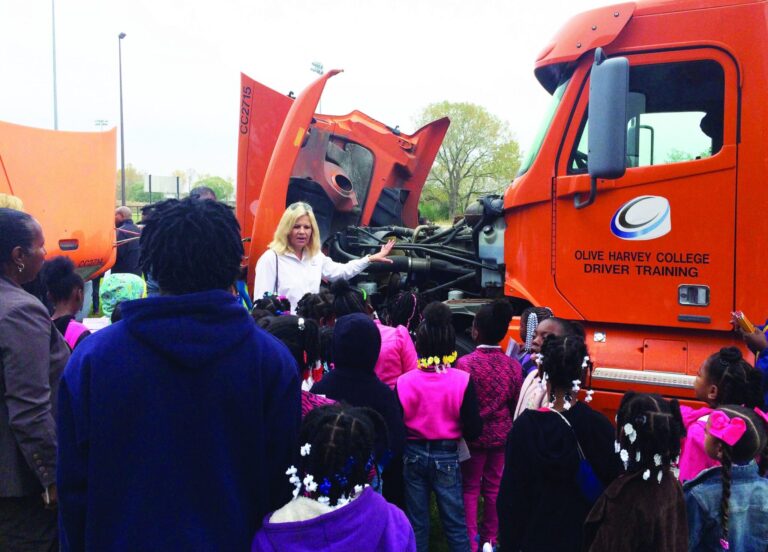 PLOVER, Wis. — Most girls are taught from a young age that they can be anything (or anyone) they want when they grow up. They tend to dress up their Barbie dolls in beautiful dresses and maybe even a doctor’s coat, but what about transportation and logistics? Girls can do that, too.
Perhaps the perception that transportation and logistics is a field for men only is an overwhelming stereotype in society, but Women In Trucking President and CEO Ellen Voie isn’t settling for that idea. She and the WIT non-profit organization are not only working to break the stigma, they’re also looking to show girls and young women that a career in transportation and logistics might very well be something that works for them. If nothing else, it is definitely an option.
“Our mission includes promoting careers in transportation, and we need to do this by exposing the next generation of future drivers, technicians and leaders to the industry,” Voie said. “Girls need to see women in these roles so they can imagine themselves in the same careers.”
Introducing these young girls to women in these careers is what led to the development of the “Trucks are for Girls” event that has spread across the nation since its founding in 2014. The first event was held at Olive Harvey Academy in Chicago with more than 70 girls in attendance along with their parents. At this event, the girls met an engineer from Navistar and toured a tractor trailer with a female professional driver.
“One of the startling things that I realized was that the parents who attended hadn’t been exposed to careers in trucking and were asking as many questions as their daughters,” Voie said.
The idea for this event came about when Voie learned that the Boy Scouts of America offered a transportation badge. When she contacted the Girl Scouts, she found that there was not an equivalent for its members. There was, however, an aviation badge. As with the thinking that led Voie to create the Women In Trucking organization, she thought “why not trucking, too?”
“Transportation careers are so important to the economy, so our industry needs to take the lead in promoting ourselves to the next generation,” she said. “More importantly, we want children to understand the importance of the trucking industry so they can relate the trucks on the road to their own lives.”
WIT worked alongside the Greater Chicago/Northern Indiana Girl Scout Region to write the curriculum for girls to earn a transportation patch. Since it is not affiliated with the national Girls Scout organization and not available through the national office, it is not called a badge, Voie noted.
The patches are available only from WIT and are sold at production cost, which is $1. The patch is available for free to all WIT corporate members as well as any Girl Scout Troops. Voie said there have been truck dealerships, driving schools, carriers and others host Trucks are for Girls events.
In 2017, Voie participated in the University of Wisconsin Superior’s Girl Scout Transportation Day which hosted 21 girls and included a play-by-play demonstration of the supply chain and how it relates to Girl Scout cookies. The girls toured the S.S. Meteor and took a ride on the North Shore Scenic Railroad. Once back at the university, the girls were separated into groups and visited learning stations that further explained other methods of transportation with the final stop allowing the girls to meet a female professional driver.
Most recently, J.B. Hunt hosted a Trucks Are for Girls event in Fayetteville, Arkansas, with 30 girl scouts in attendance. The girls had an interactive session with Tami Allensworth, senior vice president of customer experience at J.B. Hunt, where she spoke about supply chain. The girls also had the opportunity to explore a tractor from J.B. Hunt’s intermodal fleet.
In addition to the patch, WIT also offers a “Scouting for Cookies” activity book, which teaches children how trucks are instrumental in the process of facilitating the production of girl scout cookies as well as delivering them.
“When [Girl Scouts] see a truck, they might think about whether their own cookies are in the trailer,” Voie said.
WIT has also created Clare, a truck driver doll, which aims to provide another method through which girls can be exposed to transportation career options. Voie said there are plans for other dolls including technicians and dispatchers as well as ethnically diverse dolls.
There have been 1,575 girls who have earned the patch in three counties so far, but Voie has big plans for the program and would like to see it grow even larger.
“I’d like to see this expand to more countries so children everywhere can learn about the transportation industry,” Voie said.
For more information about hosting a Girls in Trucks event or participating, contact Women In Trucking at [email protected]