“I feel that a truck is a tool you use to achieve your goals — a means to an end,” he told The Trucker. “I love trucks and I like looking at them, but I need to get back to work.”

“I grew up on a farm. That’s probably where I got my work ethic,” he explained. Hoffman is a fourth-generation trucker who no longer farms. His small (four-truck) company hauls refrigerated freight, much of it cheese and butter, from Wisconsin to points in the south and west, often returning with produce.

His latest acquisition is a 2019 Peterbilt 379 glider kit, equipped with a Caterpillar C-16 engine paired with an 18-speed Eaton transmission.

“I built it specifically because it isn’t ELD-compliant,” he said. Hoffman’s truck was selected for the 2019 Cat Scale Super Trucks series.

Hoffman realizes that the 18-speed transmission is a bit much for the work his business handles, but he made the investment anyway.

“There’s no need to split the gears in low range,” he said. “I went with the 18 speed for the higher torque and better resale value. I always try to look at the resale aspect; it just makes sense.”

When asked why his glider isn’t ELD-compliant, Hoffman doesn’t hold back on sharing his opinion of the Federal Motor Carrier Safety Administration’s mandate for electronic logs.

“The current government overreach with ELDs has really impacted efficiency,” he said. “Time is money.”

Although Hoffman prefers to stay closer to home, one truck he owns, plus an owner-
operator leased to him, are California-compliant and often run to the West Coast and back.

“I don’t go out west that much myself. I’m kind of the relief guy,” he explained. “If I go out, I’m usually home the next day or so.”

In addition to running the business, Hoffman does much of his own maintenance. He also spends time with his three children, none of whom have expressed an interest in trucking.

“They all rode along on trips when they were younger, but that’s it,” he said. “Now, they just think Dad’s got a lot of money.”

As a divorced single father, Hoffman was responsible for at-home classes when the schools closed their doors last spring because of the COVID-19 pandemic.

“Internet comes at a premium here,” he explained. “E-learning was an experience.”

All of Hoffman’s children, including the oldest son, a senior in high school, are involved in athletics. Hoffman says he attends as many events as he can. The family also enjoys camping and driving four-wheelers and snowmobiles, although closings due to COVID-19 have disrupted their plans this year. Hoffman hunts, too.

Hoffman finds life a little easier since downsizing from a fleet of 25 trucks.

“I’ve already lived that dream,” he said. “It’s too much stress. I like the size we’re at now. We’re not getting rich, but we’re making a living and I have time for the kids.”

Owning a smaller company doesn’t keep him from staying busy, however.

“I pride myself on making things work. When all the trucks are rolling and making money, I have accomplished something,” he said. “My phone doesn’t get shut off at 5 p.m. on Friday.”

Hoffman has participated a few truck shows, as both contestant and visitor.

“Truck shows tend to be a lot of time and money for very little return,” he said. “It’s a great time, but it’s not productive. I’ve showed a couple of trucks — we entered one last year in Chippewa Falls — but it’s just hard to get back to work.”

Hoffman may not have time for truck shows, but he always has time for show trucks.

“I love the custom trucks with all the chrome and custom paint jobs — Long-nose Peterbilts, some Kenworths,” he
noted.

Despite the long hours he puts into his business, Hoffman took time for one diversion this year.

“I recently bought a new bike and rode it to Sturgis this year,” he said. “I’m all about that throttle therapy.”

Whether he’s piloting one of his trucks down the highway, turning a wrench in the shop or handling paperwork in the office, Hoffman stays productive. His attitude toward honesty and trust is old-school.

“My biggest thing is my integrity. If I tell someone I’m going to do something, I do it,” he explained. His motivation for staying in the business is simple. “I do it for the love of trucks.” 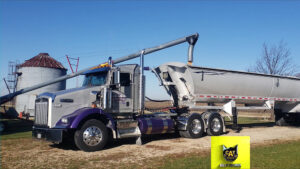 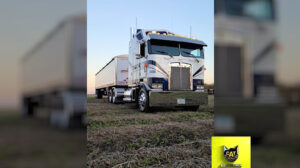 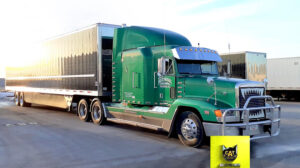 Congratulations! Good for you and sounds like your a great father! Loved the write up!

Love it! Same with my boss he downsize and it’s much better now but only 4 of us total.✌️

That a beautiful truck you have there. I appreciate you story I grew up on a dairy farm inPa. Dad sold the farm and I got in an 18 wheeler Finally retired at 70. Liveing on the east coast I did way more New Jersey andNYC Long Island than I cared for.