Some drivers own so much equipment worthy of the term “show truck” that it can be difficult to choose which is the best. Jason Mayrand’s Flat Top Transport, based in Holland, Michigan, is a good example.

One of Mayrand’s trucks, a 2017 Peterbilt 389, was selected for Series 19 of the Cat Scale Super Trucks card series. The grey Pete has a red frame and sports a Detroit Diesel engine and a 13-speed transmission. For the card photo, he paired the Pete with a highly polished MAC pneumatic tank trailer.

Mayrand said he named Flat Top Transport for his grandfather, a professional driver, who passed away when Jason was just 16.

“I rode with him all the time,” Mayrand said. “On one trip out west, I knew trucking was what I wanted to do.”

He named his trucking company after his grandfather’s CB handle, and today he uses the handle himself.

“We take a lot of grief from drivers that see our trucks that aren’t flat-tops,” he said, “but then we explain the story behind the name.”

Although trucking runs in his family, Mayrand is proud that he started his own business rather than inheriting one from his father or grandfather.

“My wife and I started this business from scratch and built it into what it is today,” he stressed. “I don’t think I want it to get much bigger; it’s at a good size right now.”

These days, Mayrand brings his 3-year-old son, “Wayjay” (Waylon Jay), along whenever he can.

“The kid is a truck nut,” he explained. “His room is lined with posters for Renegade products. He has his own Instagram page. He’s even got his own air-freshener fragrance.”

On one recent trip, this tiny future trucker found a copy of The Trucker and the publication’s Jobs Magazine at a Petro truck stop.

“He gets all the free magazines he can,” explained Mayrand. “He got a copy of one with the Snows on the cover.” (The October issue of Jobs Magazine, published by The Trucker Media Group, features Daniel and Phyllis Snow and their classic Freightliner, “The Goose.”)

Mayrand also has a 13-year old daughter and a 1-year-old son.

“We used to love to go boating, but we couldn’t do it the way we liked with the ‘littles,’ he said. “So, we bought an RV instead so we can go camping and make a trip south every winter.”

Flat Top Transport is truly a family business. The company hauls mostly food-grade dry bulk products in pneumatic tankers, usually returning empty to avoid cross-contamination of product. Some grain products are hauled, too, and a van trailer was recently added to the fleet that is pulled by an owner-operator who leases to the company.

“My wife does the books and the accounting. I do the dispatching and simple repairs, and I try to be the fill-in guy when a truck needs a driver,” Mayrand said. “We don’t do a lot of broker loads. Almost all of our loads are directly for our customers.”

The family attends truck shows when they can, according to Mayrand. One of their trucks took first place at the Richard Crane truck show in St. Ignace, Michigan, last year, and they have also won at the Union Grove Truck Show in Wisconsin.

“We wanted to make Louisville this year (the Mid-America Trucking Show) but it was canceled,” he said. “We try to make other shows, too, but when it gets busy, the business comes first.”

A current project for Mayrand is the complete teardown and restoration of his first truck, a Peterbilt 379. Mayrand plans to equip the truck with a Double Eagle sleeper and keep the design “old school,” he said. He plans to show the truck, eventually passing it along to his children when they are old enough to enjoy it.

“We’ve taken it down to the frame rails, and I’ve got new rails on order,” he said.

The business doesn’t leave much time for hobbies or other activities, Mayrand noted, but he says he loves what he does.

With a family like Mayrand’s, it seems Flat Top Transport will be in good hands for years to come. 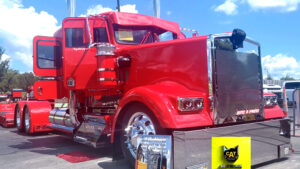 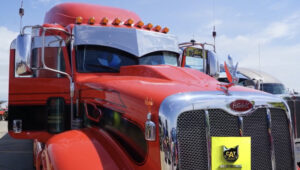 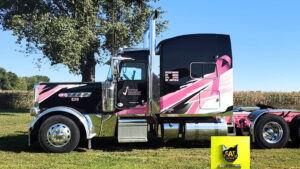