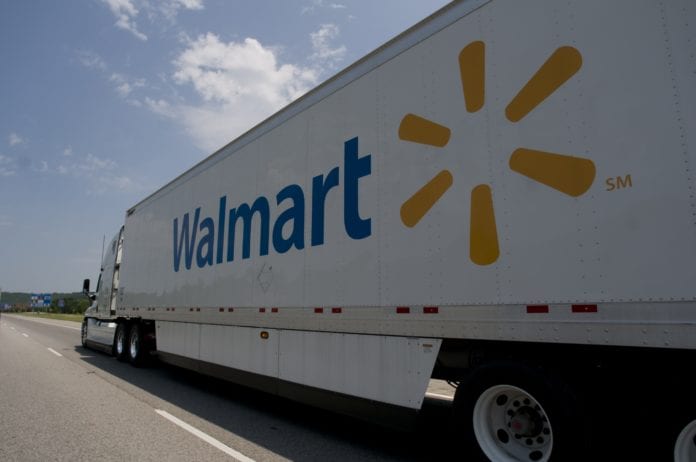 Walmart requires truck driving job candidates to have at least 30 months of full-time commercial driving experience and no serious traffic violations in the past three years. (Courtesy: WALMART)

BENTONVILLE, Ark. — Walmart says it needs to add 900 truck drivers to its fleet during 2019 and is willing to pay to get them on board.

Wednesday, the company said it will provide Walmart drivers the chance to earn an average of $87,500 in their first year of employment with an all-in rate of almost 89 cents a mile.

Beginning next month, Walmart drivers will receive a per-mile increase of $0.01 and a 50-cent increase in activity pay for arrive and arrive/drop occurrences.

That means Walmart drivers will now be paid up to $1 every time they arrive at their destination and drop a trailer, the company said.

“Truck drivers are a critical part of our team here at Walmart and have been since Sam Walton started the private truck fleet in the 1970s,” said Greg Smith, executive vice president of Walmart U.S. Supply Chain. “Our professional drivers are part of what makes Walmart so special. This wage increase reflects the importance of our private fleet and our commitment to recruiting and retaining the best drivers in the industry.”

According to the retailer’s website, each year Walmart’s 8,000 drivers travel more than 700 million miles and deliver millions of cases of merchandise to Walmart and Sam’s Club’s 4,700 locations across the nation.

CBS News reported that as of May 2017, the median annual pay for heavy and tractor-trailer truck drivers was $42,480, according to the U.S. Department of Labor. Driver pay has since climbed, and by March 2018 came to more than $53,000 for a driver on a national, irregular route, the American Trucking Associations found. The industry group projects the U.S. will be short 175,000 drivers by 2026, CBS said.

Walmart requires job candidates to have at least 30 months of full-time commercial driving experience and no serious traffic violations in the past three years.

The revamped orientation initiatives have already cut in half the time between a candidate’s initial interview and a mandatory driving assessment, expediting the time it takes to complete a new hire.

“These hiring events are both improving the skill level of our candidates and enriching their onboarding experience,” said Lori Furnell, Walmart’s director of driver talent acquisition. “We’re leaning heavily on the expertise of our Walmart road team and our certified driver trainers to grow our skilled fleet of professional drivers.”