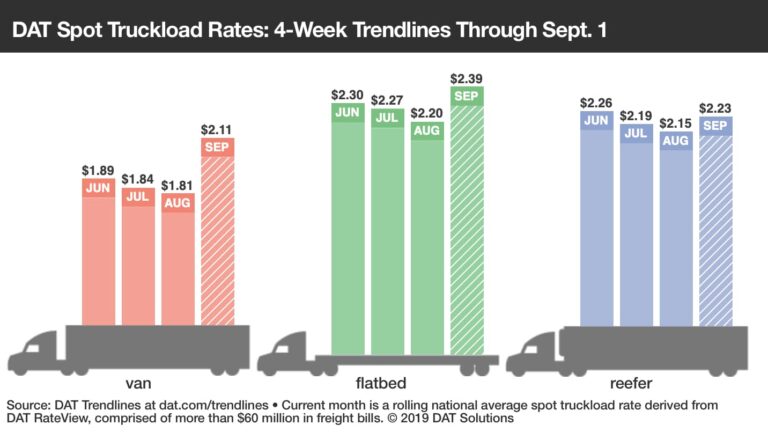 The September rolling average reflects just one day of activity, Sunday, September 1, but shows how much higher spot rates are to start the month compared to August:

Van load-to-truck ratios were notably strong and hit 3.0 as a national average on Wednesday, August 28. Van rates tend to rise when the ratio exceeds 2.5, which is where the average settled for the week.

Dorian’s effects on supply chains came late in the week and had little impact on national trendlines during the reporting period. Rates on 73 of DAT’s Top 100 biggest van lanes by volume were higher, 17 lanes declined, and 10 were neutral compared to the previous week.

While every major market east of the Mississippi River reflected stronger volumes last week, Memphis stood out with a 15% gain in available loads and an average outbound rate of $2.15 per mile, up 4 cents.

The national reefer load-to-truck ratio rose from 4.4 to 4.8 last week on the strength of apples and other tree harvests in the Pacific Northwest and Upper Midwest. Load-to-truck ratios jumped sharply in the Pendleton market (Yakima, Washington) and hit 23 on Friday, August 30, while Spokane, Washington, which includes Wenatchee, topped 34. The numbers are more stark at the ZIP code level: 988XX — Wenatchee— had 544 loads posted and just five trucks, while 989XX —Yakima—had 851 loads posted and 56 available trucks.

One indication of advance planning for Hurricane Dorian: Lakeland, Florida, outbound reefer volume was up 14% and the average outbound rate jumped 8 cents to $1.39 per mile. Lakeland to Atlanta increased 18 cents to an average of $1.38 per mile.