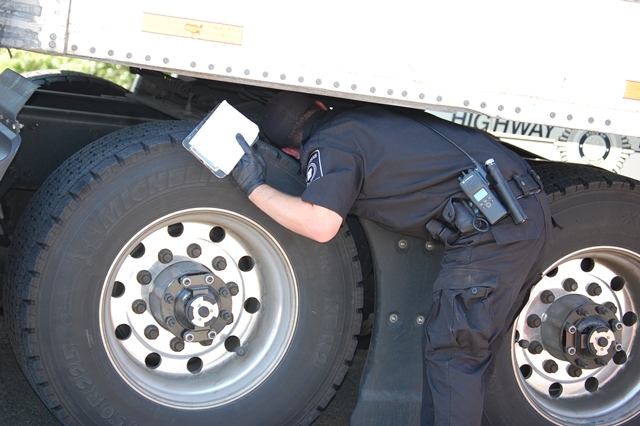 That’s likely the reaction of 10,358 professional truck drivers who had their braking system inspected during the Commercial Vehicle Safety Alliance’s unannounced brake safety inspection initiative May 15.

The CVSA said out of the total CMVs inspected, 1,667, or 16.1% had brake-related critical vehicle inspection items and were placed out of service until violations were corrected.

According to the Federal Motor Carrier Safety Administration, more than half a million commercial motor vehicle violations in 2017 were related to brakes.

CVSA aims to call attention to this serious issue through its targeted brake safety enforcement and awareness campaigns, such as the May 15 unannounced inspection blitz, according to CVSA President Chief Jay Thompson with the Arkansas Highway Police, who said the enforcement initiative highlights the work that’s done by inspectors every day to keep our roadways safe. Checking brake systems and their components is always part of roadside vehicle inspections.

“Brake hoses and tubing must be properly attached, undamaged, without leaks and appropriately flexible,” Thompson said. “Because they are such an important part of the braking system, the failure of hoses or tubing can cause problems for the entire braking system.”

Fifty-five jurisdictions in the U.S. and Canada participated in this focused one-day brake safety inspection and enforcement initiative. Participation by law enforcement jurisdictions is voluntary and depends upon availability of staff and resources. Each participating jurisdiction captured and reported its May 15 data to CVSA. Inspection data from Canada and the U.S. featured the following notable results:

According to FMCSA’s Analysis and Information Online 2019 calendar year data snapshot as of June 28, 2019, out of 1.8 million inspections, the top five brake-related violations were:

CVSA conducts brake-focused enforcement events, such as Brake Safety Day, to identify and remove commercial motor vehicles with dangerous brake issues from our roadways to reduce the number of crashes caused by or made more severe by deficient braking system performance.

CVSA is holding another brake safety enforcement event this year, Brake Safety Week, which is scheduled for Sept.15-21, at participating jurisdictions throughout North America. The week is an annual outreach and enforcement campaign designed to improve commercial motor vehicle brake safety.

Brake Safety Day and Brake Safety Week are inspection, enforcement, education and awareness initiatives that are part of the Operation Airbrake Program sponsored by CVSA in partnership with FMCSA and the Canadian Council of Motor Transport Administrators.

1,667 trucks put out of service during unannounced brake safety initiative

I’d love to see the same roadside inspections done on 4wheelers.
We truckers see multitudes of cars on the road, day in and day out, of cars that SHOULD NOT even be considered drivable!
And what’s with these idiots that disconnect their rear lights.
Do they think they’re thugs?
Just wait til one of us rear end you because we cant see you!