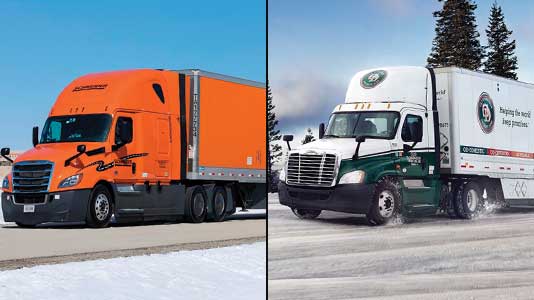 LOS ANGELES – Two of the country’s prominent motor carriers have agreed to pay a total of $225,000 in penalties to resolve violations of California’s Truck and Bus Regulation.

In addition, the EPA said the company failed to verify that nearly 1,200 of the carriers it hired in California complied with the truck and bus rule. Schneider, headquartered in Green Bay, Wisconsin, will pay a $125,000 penalty and spend $350,000 on air filtration projects at schools located near freeways in the Los Angeles area.

The EPA said Old Dominion Freight Line of Thomasville, North Carolina, operated 117 heavy-duty diesel trucks in California from 2013 to 2016 without the required diesel particulate filters. The company did not verify 64 of the carriers it hired in California complied with the Truck and Bus rule. The company will pay a $100,000 penalty and spend $225,000 on air filtration projects at schools in the Rialto, California, area.

EPA made the announcement at an event at Eastman Avenue Elementary School in Los Angeles, highlighting the installation of an air filtration system similar to those that will be funded by the settlements announced Thursday.

EPA was joined by the California Air Resources Board, the South Coast Air Quality Management District, and the Los Angeles Unified School District.

“California’s Truck and Bus Rule is providing the emissions reductions necessary to help meet federal air quality standards,” said Todd Sax, enforcement chief of the California Air Resources Board. “This settlement shows that all fleets operating in California, including national fleets based in other states, must comply with regulatory requirements.”

The South Coast Air Quality Management District will verify performance of the systems and training of school staff. The project at Eastman Avenue Elementary School includes a ten-year supply of replacement filters, which are expected to remove more than 90 percent of ultrafine particulate matter and black carbon. Schools near major freeways can be exposed to high levels of traffic pollution. Studies have shown that improved indoor air quality in classrooms increases productivity and improves attendance and performance in both adults and students.

CARB said diesel emissions from trucks are one of the state’s largest sources of fine particle pollution, or soot, which has been linked to a variety of health issues, including asthma, impaired lung development in children, and cardiovascular effects in adults.

About 625,000 trucks are registered outside of the state, but operate in California and are subject to the rule. Many of these vehicles are older models and emit high amounts of particulate matter and nitrogen oxides, the EPA said. The rule, which requires diesel trucks and buses that operate in California to be upgraded to reduce diesel emissions, is an essential part of the state’s plan to attain cleaner air.

The California Truck and Bus Regulation was adopted into federal Clean Air Act plan requirements in 2012 and applies to diesel trucks and buses operating in California. The rule requires trucking companies to upgrade vehicles they own to meet specific NOx and particulate matter performance standards and also requires trucking companies to verify compliance of vehicles they hire or dispatch. Heavy-duty diesel trucks in California must meet 2010 engine emissions levels or use diesel particulate filters that can reduce the emissions of diesel particulates into the atmosphere by 85 percent or more.