Leading the panel as chair is Todd Spencer, a current member of MCSAC and the president of the Owner-Operator Independent Drivers Association (OOIDA).

“My role is to try to be a conduit for what’s possible and what’s not,” Spencer said. “I’m certain that all of these folks have something on their mind that they would like to share. It would be my hope that the agency will be interested in receiving that input.”

FMCSA announced the advisory panel appointments Jan. 15. There is no set date for when the panel will begin meeting, although the FMCSA is going through leadership changes as President Joe Biden’s administration continues to move key players into leadership positions.

Commercial drivers were asked to submit a resume and personal statement detailing their qualifications during the 21-day application period in September and October 2020.

“There are new people being appointed or selected for FMCSA, and I think those new people will have an interest in the driver panel,” he said. “I suspect that is some of what is going on in the FMCSA right now.”

Spencer said his hope is that the agency considers the input suggested by the panel. A concern he’d like to see brought up is driver detention.

“One of the things that plagues drivers in so many ways, in so many areas — and hurts the entire industry — is what happens in the unloading and loading environment, where drivers are detained, routinely and regularly,” Spencer said. “Nobody benefits when drivers are detained needlessly and unable to actually be productive.”

Deb Labree, an owner-operator who drives for Castle Transport, said being selected to serve on the panel is “pretty exciting.”

“I was completely shocked and honored that my application to be on the panel was accepted,” she said. “I’m just thrilled about it.”

Labree has been in the trucking industry for 14 years, and said she’s learned change requires action.

“You can either complain about things in the industry, or you can be a voice and educate others so that better decisions are made for us all,” she said. “If you want to make a difference, you have to get out there and make a difference. You have to volunteer your time and be a part of panels like this to educate and maybe see better things happen for our industry.”

Like other truck drivers on the panel, Labree said she is hoping to see improvements in safe truck parking.

Another panelist, Desiree Wood, is also concerned with the efforts of truck parking.

“Truck parking is something I got super involved in because of Jason’s Law,” Wood said.

Jason’s Law was passed in 2012 to enact programs and awareness for safe truck parking spaces. The law was enacted after truck driver Jason Rivenburg was murdered in 2009 during an attempted robbery while parked in an unsafe location.

Wood is also the founder of Real Women in Trucking, a nonprofit dedicated to creating a safe trucking experience for women.

Wood said she hopes the panel takes action rather than becoming what she calls a “paper tiger” advisory panel. By definition from Oxford Languages, a paper tiger is a person or thing that appears threatening but is ineffectual.

Steve Fields, a panelist and driver for YRC Freight, said he’s excited about advocating for his industry.

“It’s important for me to give my opinion,” Fields said. “It’s all of our jobs in the industry to voice your opinion. Each driver can bring something different and unique, and a different opinion.”

Fields has been driving for 35 years and has achieved 3 million miles without an accident. With experience in delivery and city runs, as well as a familiarity with different types of equipment, Fields said he has a wealth of prior knowledge to bring the table.

“As drivers, we pretty much know how important trucking is to the United States and the world,” Fields said. “Recently, with COVID, I think it’s shed some light for the public to understand and actually realize how important trucking is to this country. If you think about the toilet paper shortage, paper towel shortages and water shortages, (they) didn’t last very long — and trucking was on its way. We got the shelves stocked back up, and we were seeing people on the overpasses waving at the truckers. I think it’s shed a lot of light on how important this industry is to this country.”

As a part of the panel, he hopes to be involved in producing safer conditions for drivers.

“My main goal is to improve safety, efficiency and the whole driver experience,” she said. “By being on the panel, I have the opportunity to share my perspective as a woman and as a company driver.”

McLaughlin has been with Schneider for five years. In that time, she has made changes for the industry, becoming an ambassador for Women In Trucking, a nonprofit dedicated to encouraging diversity in employment of trucking.

As a driver ambassador, McLaughlin shares motivation, informational tips and behind-the-scenes of being a truck driver.

“All along, I have wanted to have these conversations with the people who make decisions that affect me — ‘me’ being drivers on the ground level,” she said. “The FMCSA makes the decisions that affect us. There’s no better place to be able to participate in our regulatory process than to be sitting at that table. I’m incredibly honored, and want to make the best use of their time and my time.”

In addition to the panelists mentioned above, there are 20 other professional drivers who will serve on the panel, including:

In a nutshell, the panelists simply want the voices of drivers across the U.S. to be heard, and for their input to be considered.

“You hope that when they [FMCSA] request a panel like this, that they really are serious about hearing about each one of us and each one of our experiences,” Labree said. “We all haul different kinds of freight, we all have different experiences, and we can take all that and be able to make better, sound rules for us that maybe have some flexibility and better utilize time and resources.” 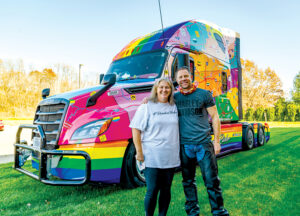 Thank you for including me in this article. I would like to comment that rape and sexual misconduct in truck driver training and a growing number of pregnancy discrimination reports are just as important to our organization as the” Jason’s Law” truck parking issue which we have been deeply involved in since 2009, just after Jason Rivenburg was murdered.
I would also like to point out that it is offensive to many diverse truck driver groups to hear that Kelly from WIT thinks diversity is important when she does not associate with the most diverse group of women truck drivers that exists in trucking which is S.H.E. Trucking Sisterhood formed by Sharae Moore. This group is so diverse and popular that even Facebook has recognized Sharae’s leadership. CNN and an upcoming National Geographic program that features Ms. Moore.
Diverse seasoned truck drivers realize that this industry wants to hand pick who can speak and who must not be heard. I met Kelly at a truck parking meeting in Texas. She was not there to associate with a diverse driver like me who is half Mexican. She spoke to everyone except me even though the hosts from TXDot and Texas Transportation Institute told her how active I had been not just on the truck parking issue but also women’s issues. REAL Women in Trucking has created a platform for women who have been cautious about being outspoken in the past. Women who have been affected by discrimination, retaliation and worse in this industry which made them silent.
If Kelly really cares about diversity, I urge her to reach out to the dozens of women’s trucking groups that collectively have a community of over 40,000 drivers, mostly women of color who are young and seeking guidance as they enter this industry. Real diversity is not talking about it when you are ignoring those who already exist. Talk to Sharae Moore and her team, talk to Tamara Brock who has a massive social media following. Diversity is already in trucking, everywhere you look, it has just been ignored. The truth about the trucking establishment is that if they cannot control what the driver is saying and what is being heard, they are not interested. That’s not diversity and inclusion, that’s tokenism.