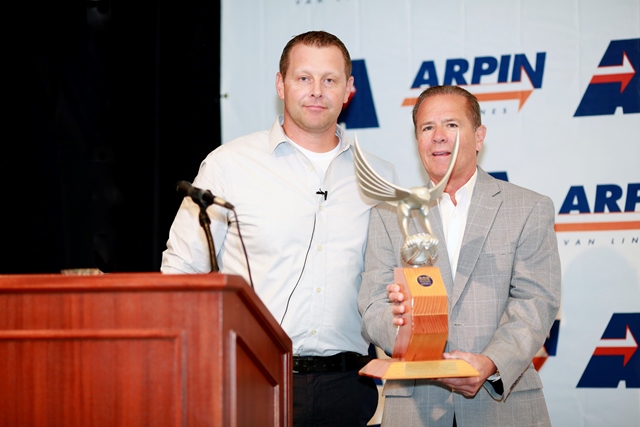 The group presents the award annually to a deserving professional truck driver, company or organization that has supported charitable causes in ways that will affect generations to come.

“My father, Paul Arpin, was an Army veteran of World War II and a survivor of the invasion of Normandy,” said David Arpin. “Following the war, he returned home to run Arpin Van Lines until he was 86 years old. When presented with the opportunity to support Wreaths Across America by one of our drivers, it was a no-brainer. Receiving this award is an honor and only further solidifies my support for the organization and appreciation for all of the trucking industry volunteers who make it possible each year.”

Arpin Van Lines’ employees and agents have supported Wreaths Across America’s mission to honor veterans for the past six years, according to Rob Worcester, a member of the WAA founding family and logistics team, adding Aprin had donated time and transportation services leading up to and on National Wreaths Across America Day each December, when the organization places wreaths on the graves of fallen veterans.

In 2017, Arpin Van Lines hauled 26 tractor-trailer loads, totaling approximately 140,000 wreaths, and delivered them to participating veteran cemeteries across the country.

Rob Worcester, member of the Wreaths Across America founding family and logistics team, presents the award to David Arpin, president and CEO of Arpin Van Lines. (Courtesy: WREATHS ACROSS AMERICA)