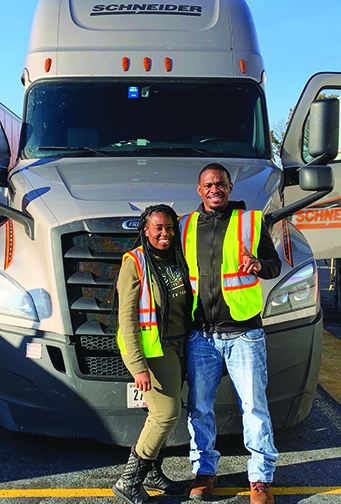 CLEVELAND, Ohio — A lot of career success stories start with a resume. The same can’t typically be said for love stories. For Gwenetta and Julian Binns, however, both became reality. The two got the best of both worlds when they struck up a conversation at a local career fair in Ohio.
Julian was looking into the possibilities of getting funding to attend CDL driving school, while Gwenetta was checking out local vendors and updating her resume. She had already obtained her CDL three years earlier but had not started driving professionally just yet.
“I helped him with his resume, and he helped me with things, and we just hit it off,” Gwenetta said. “I talked to him for about four or five hours that day. I never called him, but he called me. I decided to give him a chance, and we started dating.”
In the time that Gwenetta and Julian were dating, Julian obtained his CDL through the same program Gwenetta had completed years earlier.
The couple got married in June 2019 and only three months later, the two hit the road as a pair. Now they are team drivers of a 2020 Freightliner Cascadia hauling for Cleveland-based Formica Flooring where they drive a dedicated route from Indiana to Ohio and Pennsylvania.
Although Gwenetta had her CDL for quite some time before meeting Julian, she already knew she wanted to drive as a team with someone she could get along with. When she met Julian, everything just seemed to fall into place. Gwenetta was then able to stop working jobs outside of the transportation industry and put her CDL to use.
It took some searching, though, to find a company that would train them together.
“There are a lot of companies that will take teams but won’t train you together,” she said. “We wanted to be able to train together. When we finally found someone who would train us together, it was basically three of us and a trainer in the truck. It worked out.”
Gwenetta admits that she was initially a bit nervous about training with Julian, but she quickly found that they made a great team and having the trainer with them in the beginning helped them to learn how to work together and get better acquainted with being behind the wheel.
“We are still learning each other,” she said. “I’m learning his habits, and he’s learning mine. We are figuring out what we like and don’t like. Driving together teaches us a lot, but we rarely bump heads about anything. We work really well together, and there’s a lot of teamwork. We call ourselves Team Binns.”
Although being in a confined space with a spouse during the first few months of marriage can seem challenging, Gwenetta said that taking shifts allows for the two to get plenty of space. Typically, while she is driving Julian is sleeping and vice versa. Their designated route is about eight hours of drivetime one way, which makes for an ideal length of time before needing to switch drivers. Working as a team helps to keep the truck moving while a single driver would need to stop for rest.
“Every once in a while, we might get on each other’s nerves, but for the most part, we don’t really cross paths like that,” Gwenetta said. “[When one of us isn’t sleeping] we listen to music and talk. It might be hard, but if you can find that person that you can tolerate all day every day, [driving] is a perfect job.”
Also under the category of a “perfect job,” Gwenetta said the couple normally spends all week on the road but is back home for the weekend, which allows for plenty of time to spend apart or relax with family and friends.
Long before Gwenetta became a part of “Team Binns,” she wanted to pursue culinary arts and even attended college to do so. A little later, she did a little research and found out that the money in that industry wasn’t exactly what she had in mind, and she quickly lost her passion for cooking professionally. With the encouragement of a few friends who were truck drivers, Gwenetta started to consider getting her CDL. The deal was sealed when she realized that driving a truck provided the ideal financial stability she was seeking in a career.
Driving as a team, though, allows for even more financial stability since Gwenetta and Julian can save money by minimizing bills at home while they are on the road all week.
“We can both save up like we want to now,” she said, adding that the two have plans of buying a house soon.
Even though she is a part of a team, Gwenetta said she still gets interesting
responses when some people see a woman driving a truck, but that has never detoured her from wanting to grow in the trucking industry. If anything, she said it encourages her to continue.
“Don’t underestimate us women. We can outdrive just about anybody,” she said. “I tell my husband that all the time.”
As Gwenetta and Julian learn more about the trucking industry and each other, the two hope to someday be their own business, but for now they are happy to have the opportunity to work together every day.
“We love what we do and hopefully we will be able to purchase our own truck someday,” she said. “We really like the company we are with and we love seeing the world together.”

This is encouraging me and my fiance has plans on getting our cdls and doing the same thing……I love seeing success stories with this its encouraging….