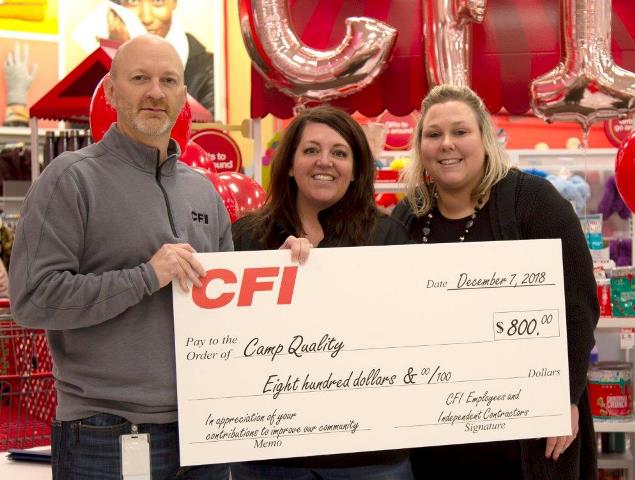 JOPLIN, Mo. — Employees of transportation company CFI once again played the role of Santa Claus by supporting charities serving thousands of individuals in eight cities across the U.S., Mexico and Canada in their annual holiday giving campaign.

Now in its 25th year, the Truckload of Treasures campaign supported 17 charitable organizations across North America this December.

CFI President Greg Orr, left, presents a check to Angee Tingle, center, and Kristin Patterson of CampQuality Missouri, during the annual “Shopping Spree” at the Joplin, Missouri, Target where over 200 CFI employees used their donations to purchase gifts and supplies for 350 Joplin families, children and elderly.

A longstanding tradition unique to CFI’s culture, Truckloads of Treasures was established in 1993. The 2018 campaign raised over $46,000 entirely contributed by employees and independent contractors.

“This is one of the most inspiring events of the year for our company, our employees and the communities where we live and work,” said Greg Orr, CFI president “Our employees embrace giving back, engaging with our communities to help those underserved and less fortunate. I’m extremely proud of our employees, and I appreciate the spirit, joy and commitment they bring to this campaign every year to help meaningful charities in Joplin and across North America.”

The campaign supported nine charities in CFI’s headquarters of Joplin. Earlier this month, some 200 CFI employees participated in the annual “Shopping Spree” at the Joplin Target. Employees purchased over $21,000 in gifts and needed supplies, based on lists of items submitted by some 350 local underserved children and seniors identified by the Salvation Army.

At the “Shopping Spree,” the company also presented checks to local Joplin charities including Art Feeds, Ronald McDonald House of the Four States, Children’s Haven, the Area Agency on Aging, Pro Musica, Camp Quality and the Boys and Girls Club of Southwest Missouri.

Donations were raised through a company-wide raffle with prizes including gift cards for retailers such as Target, Best Buy, Lowe’s, Sam’s Club, Bass Pro Shops and Academy Sports and Outdoors, as well as other prizes. All prizes were purchased and donated by CFI’s executive management team. The raffle also included two special drawings awarding one and two weeks of paid time off. Additional funds were raised through bake sales, a chili cook-off, book fairs and separate auctions of locally-donated prizes.

CFI’s philanthropic efforts in 2018 also included the provision of over $83,000 of in-kind transportation services for two nationwide charitable organizations. The pro-bono services supported Holy Joe’s Cafe, which sends donated Keurig Green Mountain coffee to U.S. troops stationed in 70 countries, and Wreaths Across America, which each year during the holiday season, honors more than a million fallen U.S. veterans and their sacrifices for our freedom by placing remembrance wreaths at more than 1,400 locations in 50 states, at sea and abroad.

Since inception, Truckloads of Treasures has raised nearly $800,000 for local charities.