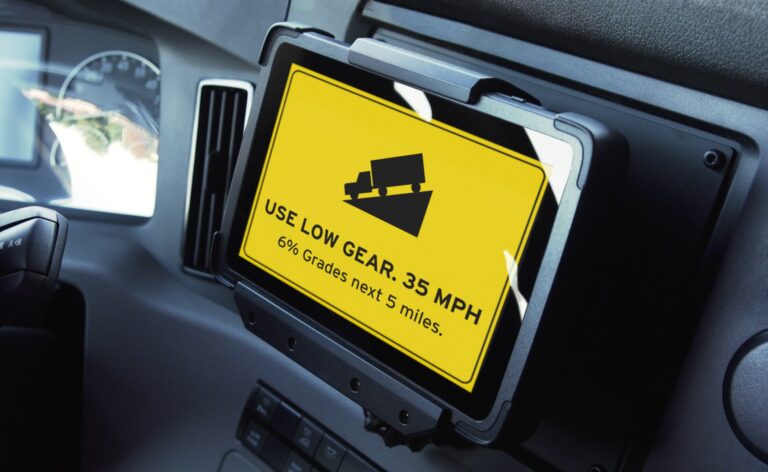 GOLDEN, Colo. — Drivewyze has added to its Drivewyze Safety Notifications service with the launching of mountain corridor safety alerts.

The new service, free to current Drivewyze customers, was released in conjunction with a Colorado Department of Transportation’s news conference that launched its “The Mountain Rules” truck safety campaign.

The conference was held Tuesday near the Mount Vernon Canyon runaway truck ramp, near Golden.

“It’s no secret that our mountains create immense challenges for semi-truck drivers,” said CDOT Executive Director Shoshana Lew.  “The Mountain Rules has a simple mission – to get everyone home safely and this campaign, which supports CDOT’s Whole Safety – Whole System initiative, is a major step towards achieving that goal.”

“I want to dispel any misconceptions, myths or rumors about truck ramps for all commercial carriers who travel our mountain corridors,” said Col. Matthew Packard of the Colorado State Patrol. “Commercial carriers will not be cited by law enforcement for using truck ramps. Should your brakes fail, please save lives and use the ramps.”

With the alerts, Drivewyze subscribers will have their drivers receive in-cab alerts of upcoming safe locations to pull over for brake check inspections and see prompts to gear low while showing suggested maximum speeds down steep grades. It will also alert drivers of upcoming runaway ramps. Colorado is Drivewyze’s first state in the new alert program. Seven Colorado mountain passes are part of the Drivewyze Safety Notifications package, with 22 more states to follow by the end of August.

According to Brian Mofford, vice president of government experience at Drivewyze, Colorado’s I-70 west, which goes from Vail Pass from the west, through Eisenhower Tunnel (elevation 11,158) to Mt. Vernon Canyon to the east, represents 60 miles of difficult driving.

“It’s a challenge for truck drivers, with steep grades and heavy traffic, especially for those new to mountain driving,” Mofford said. “Drivers have to be in tune with their surroundings, check their brakes and be prepared for constant downshifting and speed control. Brakes can get hot and fail for those who are not ready. It’s why we also have notifications for runaway ramps as a last resort safeguard for a safe stop. Our alerts will help keep preparations top of mind to help keep truck drivers and the motoring public safer.”

I-70 is known as having one of the country’s most difficult passes for truck drivers. A runaway truck in April slammed into stopped traffic near Lakewood, killing four people. Other tragedies have been averted thanks to truck drivers using the corridor’s five runaway truck ramps along the route. The Lower Straight Creek runaway truck ramp along westbound I-70 at milepost 211.83 is the most used truck ramp in the United States, being used once a week on average during the summer months.

“The goal is to not have to use the ramps at all, by having drivers better prepared,” Mofford said. “Our alerts will keep safety front and center and prompt drivers to check their brakes, allowing them to cool down, and remind them to downshift to a lower gear.”

The mountain corridor alerts join two other Drivewyze Safety Notifications that were introduced last month. Rollover alerts, on targeted exit ramps and curves, are geofenced at 500 locations in 32 states, while l,500 low-bridge warnings are given to drivers approaching bridges in the United States, with 300 more just added on Canadian roadways.