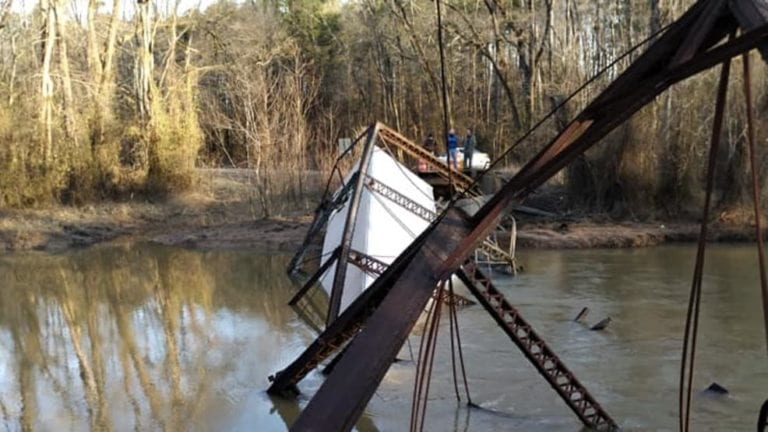 OLA, Ark. — The Arkansas Democrat Gazette reported Thursday that crews were working to remove an 18-wheeler from a river in Arkansas after the driver, relying on his GPS, drove over a nearly 90-year-old bridge before it collapsed.

Yell County Director of Emergency Mangement Jeff Gilkey said authorities responded to the bridge just after 8 p.m. Wednesday when the driver tried driving the truck across the Dale Bend Bridge near Ola.

Gilkey told the newspaper that the driver had likely gotten lost and was following his GPS through narrow dirt roads before he got to the crossing.

The truck remained in the Petit Jean River on Thursday morning after continuing to sink overnight, “completely submerging” the trailer, Gilkey said, adding that it would be an extensive recovery and the scene was “quite a mess.”

The county is working with the driver’s insurance company to get the truck out “as soon as possible,” Gilkey said.

Photos show the bridge collapsed under the weight of the truck, tilting the vehicle on its side as it hit the water, the county sheriff’s office said. Gilkey said the driver was “a little shaken up” but wasn’t injured and managed to escape.

Photos show weight restriction signs ahead of the bridge are listed at 6 tons. County officials said the truck was around 40 tons and carrying chicken products from a nearby farm.

Gilkey told the newspaper that he was surprised the driver made it to the bridge because narrow roads that often flood in the winter are the only way to get there.

Removing the truck might require bringing in equipment from outside the state, he said.

“Our biggest concern now is remediation and getting a new bridge,” Gilkey said, adding that it’s used often by local residents and outdoor enthusiasts visiting the area.

The paper reported that the Vincennes Bridge Co. built the bridge in the 1930s, according to website Bridgehunter, which catalogs historical information about U.S. bridges.

OMG!!! My heart goes to this driver,I think he panicked,took his chances going forward bc he knew backing up would ve been very hard.
His career may be over,and from the sound of it,he was a newby.
If you are ever in this situation,DO NOT PANICK,stop,the police will come and help you back out,block traffic,whatever it takes,the police prefers to give out a citation,if need to,than writing a whole one or two days report..
I am sorry for this driver,we old hands have been in tough situations too,but we managed to keep our wits about us.

Let me guess… He was using a Rand MC Nally gps…