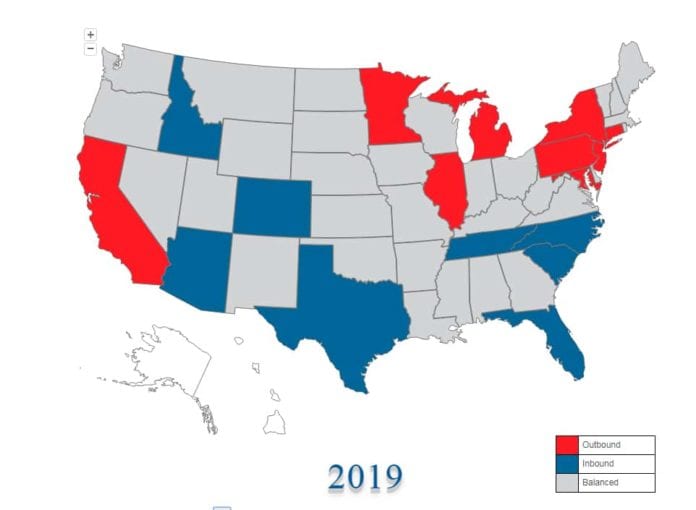 Top inbound designation went to Idaho where 69% of moves were inbound.

If you live in Illinois, most of those moving vans you saw heading down the street were full of household goods heading elsewhere.

North American said 70% of moves there were outbound. It was the fifth time in the last six years that Illinois has held that distinction.

Second was second at 65%, New Jersey was third at 64%, Maryland and Pennsylvania were tied at 61%.

The northeastern states rank high for outbound moves and have not placed within the top eight states for inbound moves since the study began in 2015.

Both Pennsylvania and New Jersey have consistently been in the Top 8 of outbound moves since the study began in 2015.

Data suggests that Americans move out of the Northeast for a couple of reasons:

The southern states rank within the top eight for inbound moves only. These states have not ranked for outbound moves since the study began.

Why do the Southern states seem to have the influx of moves? For the same reasons that apply to the previously mentioned Northeastern states, except for the opposite:

States in the Midwest typically rank higher for outbound moves. However, Colorado ranked sixth for inbound moves in 2018 before falling to seventh place in 2019.

Minnesota was not in the top eight states for outbound moves in 2018, but came in sixth place for 2019. It ranked high in several previous years as well.

The western states are mixed, with rankings for both inbound and outbound moves.

Washington and California seem to always be among the states with the most outbound moves.