BUFFALO, N.Y. — Storm-battered Buffalo braced Tuesday for fresh snow while still counting fatalities and striving to recover from the deadliest storm in western New York in at least two generations.

Mayor Byron Brown’s office announced seven additional storm-related deaths Tuesday, bringing Buffalo’s total to 27, along with at least seven suburban fatalities. The toll surpasses that of the historic Blizzard of 1977, blamed for killing as many as 29 people in a region known for harsh winter weather.

The National Weather Service predicted that as much as 2 inches more snow could fall Tuesday in Erie County, which includes Buffalo. It is the second-largest city in New York, with about 275,000 residents.

Meanwhile, state and military police are being sent to keep people from driving.

County Executive Mark Poloncarz said police would be positioned at entrances to Buffalo and at major intersections to enforce a ban on driving in New York’s second-most populous city.

“Too many people are ignoring the ban,” Poloncarz, a Democrat, said at a news conference. Meanwhile, the prohibition on driving was lifted in suburban areas. 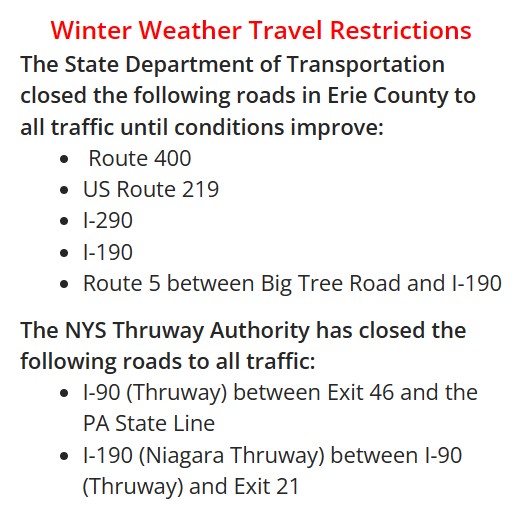 While Tuesday’s forecast was nothing like the massive storm that dropped over 4 feet of snow in some places starting Friday, “any additional snowfall that Buffalo may continue to have today is going to be impactful,” said lead forecaster Bob Oravec.

“The biggest impact is going to be how it hinders the removal of the previous snowfall,” he said.

The rest of the United States also was reeling from the ferocious winter storm, with at least an additional two dozen deaths reported in other parts of the country, and power outages in communities from Maine to Washington state.

On the Rosebud Sioux Tribe’s reservation in South Dakota, there were plans to use snowmobiles Tuesday to reach residents after food boxes were delivered by helicopter and trucks over the weekend, the tribe said.

“Ferocious winter storm”, what a joke. Here in Colorado, we had sub-zero for 2 days. Wednesday in the 40s, Thursday and Friday sub zero, Saturday in the 40s. Nothing to get up in arms about. Hell, in Yakutsk Russia, the temperature stays well below zero for fall through most of spring.
We are just not used to these types of storms these days. People dying in this type of weather is due to either their own stupidity, going out, and the reckless stupidity of towns’ and cities’ leadership; not opening up for the homeless. Except, here in Denver, our ridiculous leader closed down a recreation center to house “illegal immigrants”, and did absolutely nothing for the US citizen homeless.