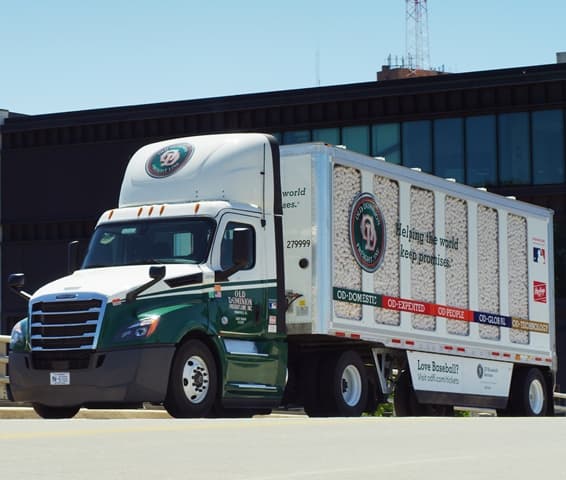 THOMASVILLE, N.C. — Old Dominion Freight Line stepped up to the plate recently and donated 12,000 baseballs to an organization that works to make sure kids who want to take to the diamond can do so, even if they can’t afford equipment.

Founded in 2005, Pitch In for Baseball & Softball (PIFBS) helps give boys and girls access to recreation and contributes to positive youth development by providing baseball and softball equipment to children around the world. Over the past 14 years, PIFBS has helped to eliminate equipment as a barrier for more than 900,000 boys and girls in the U.S. and more than 100 countries internationally.

For Old Dominion to contribute to an organization like Pitch In for Baseball & Softball seems to be a natural. Back at the beginning of 2017, the less-than-truckload carrier became “The Official Freight Carrier of Major League Baseball. As part of the partnership, Old Dominion put MLB branding on its tractor-trailer fleet, and showcases its brand on various media associated with Major League Baseball, as well as through partnerships with 10 teams: the Atlanta Braves, Boston Red Sox, Chicago Cubs, Chicago White Sox, Houston Astros, Kansas City Royals, Los Angeles Angels, New York Mets, St. Louis Cardinals and Texas Rangers.

Possible the most eye-catching promotion has been Old Dominion’s “clear” trailer that travelled around the country in 2017 and 2018 on a marketing and promotional tour. During the 2017 season, the truck was the subject of a “Seats to the World Series” contest, in which fans were invited to guess how many baseballs were in the trailer. In October of that year, after 51,000 entries, Nicholas Haas of Roanoke, Texas, had the winning guess of 178,596 baseballs, just in time to win tickets to see his beloved Houston Astros in the World Series, along with tickets to the next two World Series, as well.

With the promotional tour ended, Old Dominion found itself with a bunch of baseballs. PIFBS was happy to take some off their hands.

Meredith Kim, COO of PIFBS, said: “This donation changed the conversation with potential grantees. These baseballs help us uphold our commitment to provide baseball equipment to various programs and, in turn, reaffirms the programs’ trust in us to provide for their teams. We are extremely appreciative of Old Dominion Freight Line and their generous donation.”

PIFBS has already given baseballs to numerous clubs and organizations across the country. Several Major League teams have “RBI” programs, which stands for “Reviving Baseball in Inner Cities.” PIFBS provided balls for several of those, benefitting 195 teams across the country. Baseballs have also gone to The BASE, a Boston-based program committed to reimagining pathways to success for kids; The Philadelphia School Program, which was presented with two dozen baseballs each for 47 high school baseball teams across 38 schools, impacting 750 student-athletes.

“Old Dominion’s baseballs served their purpose for two great years in the clear trailer, kicking off our World Series sweepstakes and offering a fun photo opportunity for baseball fans as well as serving as a symbol of our partnership with Major League Baseball,” said Dick Podiak, vice president of marketing and communication at Old Dominion Freight Line. “We are happy that the baseballs will be put to good use and go to the young people who need them. This donation to Pitch In for Baseball & Softball can give the baseballs a second life.”