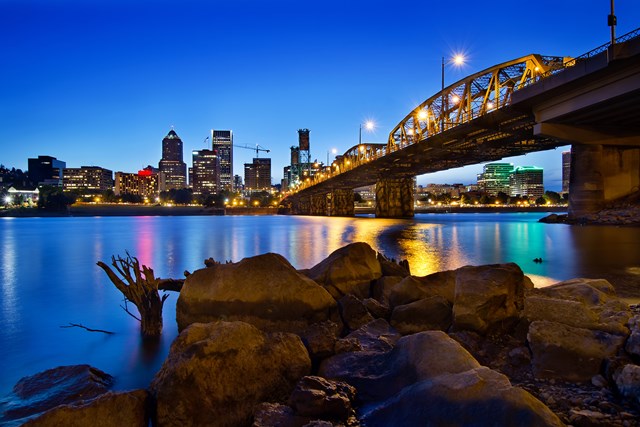 JOHN DAY, Ore. — During its Thursday meeting here, the Oregon Transportation Commission (OTC) considered the recommendations of its 25-member Portland Metro Area Value Pricing Policy Advisory Committee and provided direction to the Oregon Department of Transportation on preparation of an application to the Federal Highway Administration to implement tolling.

Last year, the Oregon Legislature directed the OTC to seek federal approval of a congestion pricing plan and last month, the advisory committee submitted recommendations to the OTC. The recommendations include an initial tolling pilot program at two locations in the Portland Metro area:

Tolling could be used to both manage congestion and generate revenue to address highway bottlenecks, including by potentially funding the I-5 Rose Quarter and I-205 Stafford Road to Abernethy Bridge improvement projects.

The ODOT will work with federal officials to determine the next steps to move tolling forward. Before receiving final federal approval to implement tolling, ODOT will conduct additional traffic and revenue analysis, undertake in-depth analysis of equity and diversion impacts, and engage the public with significant outreach and public comment opportunities. ODOT anticipates that it will be a number of years before tolling is implemented on Portland area freeways.

“We’ve heard consistently from Oregonians across the state that congestion in the Portland metro area is hurting our livability and impacting our economy. Tolling can help us both manage demand and finance bottleneck relief projects that will provide people a better commute and help us keep commerce moving,” said Tammy Baney, OTC chair. “But before we implement tolling we still have a lot of work to mitigate the potential impacts of tolling, particularly to address the potential impacts on low-income families, but also to find ways to improve public transit and address diversion of traffic off the freeway.”

OTC member Alando Simpson, who co-chaired the advisory committee, praised its members for their work.

“Everyone rolled up their sleeves to wrestle with the tough questions,” Simpson said. “By bringing everyone around the table, the process helped us move this discussion forward. We now have two potentially viable options for how to use congestion pricing to improve Portland’s transportation system.”

“We are in the early stages of discussing tolling, and we have a lot to do to design a comprehensive program to reduce congestion in the Portland region,” noted OTC member Bob Van Brocklin. “We are all aware that our population is growing dramatically, and that we will need to invest more in our infrastructure from a range of funding sources to keep up with that growth.”

Consistent with the advisory committee’s recommendation to analyze the benefits and impacts of tolling on other roadways, the OTC also provided direction to separately develop a long-term study of congestion pricing on all Portland metro area freeways including Interstate 84, Interstate 405, U.S. 26 and Oregon 217. ODOT will develop an approach for implementation, including policy review, potential geographic scope, timing, estimates of resource needs, and OTC oversight. ODOT will provide a draft proposal for OTC discussion in November and present a refined proposal for OTC approval before the end of January 2019.

“Congestion in Portland that traps trucks in traffic impacts the economy of the entire state,” said Commissioner Martin Callery of North Bend, who formerly worked for the Oregon International Port of Coos Bay and served as vice-chair of the Oregon Freight Advisory Committee. “We need to look for creative solutions that will keep freight moving so we can keep Oregon businesses strong and produce family-wage jobs.”