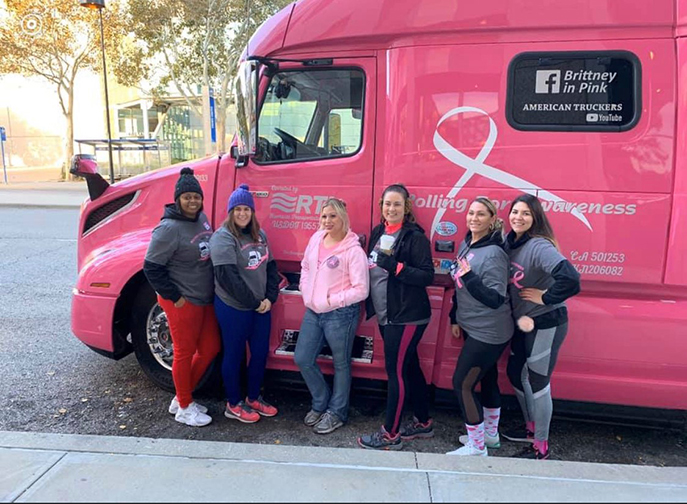 KANSAS CITY, Kan. — When now 36-year-old Brittney Richardson said she wanted to go to CDL school, a lot of her friends told her they didn’t think she had it in her. Now, 8 years later she is traveling the country in a bright pink Volvo as a lease-purchase driver for Riverside Transport Inc.
Even without immediate support from friends and family, Richardson is never one to back down from a challenge. She said that if anything, discouraging comments only empowered her.
“Almost everyone told me I’d fail,” Richardson said. “So in January 2012 I set off to truck school and six weeks later I graduated top of my class and found myself quickly in a semi going across country.”
What most who doubted her didn’t know was that Richardson had developed an interest in driving trucks when she gained some experience while working with fire departments in both southwest Kansas and central Missouri.
“I was hooked,” she said. “I loved the challenge of learning to drive a big truck and loved even more the shock when people saw it was a woman driving.”
But how did she wind up with a truck that can be spotted miles away? Short answer: she simply walked into the RTI office and came out with an opportunity to serve as a company ambassador. RTI was looking for someone to lease-purchase the bright pink 2019 Volvo and help to raise breast-cancer awareness while also inspiring women to join the industry. She sent in a video competing for the position, and she was selected.
Although the truck’s exterior design is a bit uncommon on the roads, the 2019 Volvo is still driven coast-to-coast as a work truck for RTI. Other than documenting her journey on her YouTube channel and serving as an ambassador, Richardson said she is a normal lease-purchase operator.
Driving the pink Volvo, however, does get Richardson plenty of attention, and she has encountered several fans who have drawn a personal connection to the truck’s message. Although there are more than she can count, she shared a few notable interactions with The Trucker.
“I had an older gentleman come up to my window in Ohio in tears,” Richardson said. “He shared a heart-felt story about losing his wife to cancer and thanked me so much for driving for awareness. I see people waving with enthusiasm in passing cars, people giving thumbs up and running up to get photos with the truck.”
Richardson has found that the truck also accomplishes the mission of showing young girls that women do in fact drive 18-wheelers as she travels across the country.
“One day I passed a school bus in northern Ohio and there was a row of girls on the right side of the bus as it passed me,” she said. “The girls got so excited about seeing a pink truck. This one girl who was maybe in the sixth grade smiled so big, whipped her head around to tell her friends to look at the pink truck. I am so blessed to have these moments on dash cam over the last year. I couldn’t help but wonder if that moment inspired another little girl to do something she didn’t think she could do one day.”
Chelsee Patton, Director of Recruiting at RTI said that Richardson is a great example of a company ambassador, and she and Toya Cosby, who drives a 2020 pink Freightliner, help to promote women in the industry and raise breast-cancer awareness in a unique way.
“Brittney is a great driver at RTI, and we are incredibly lucky to have her on our team and have her showcase her trucking journey in her pink truck,” Patton said.
Richardson said her main role as an ambassador is to inspire and support women (and men) in the trucking industry as well as represent RTI as a company that stands with women in the industry and give them all the support needed to succeed.
Although Richardson doesn’t have a personal connection to breast cancer, she does have an interest in inspiring others, which is evident through her Brittney Richardson YouTube channel. She also hosts American Trucker on YouTube, which is maintained separately and geared toward anyone in the trucking industry.
“One night I decided to bring the camera along and film my night at work in the truck,” Richardson said. “It was an instant hit and the amount of people who responded back that I had made there day was unreal. That’s when I really realized I could inspire a lot of people by simply sharing my life on film.”
Richardson also documents her journey in the pink Volvo on her Facebook page, Brittney in Pink.
Richardson said she gets feedback from both male and female drivers who tell her she is an inspiration to them. She sees photos of new trucks and driving certificates, which she said keeps her going and continues her passion to inspire others both inside and outside of the trucking industry.

Your awesome my dad drove till he had a stroke I drove school bus 26 yrs. I’d love to do yours part time.

I commend you all the way