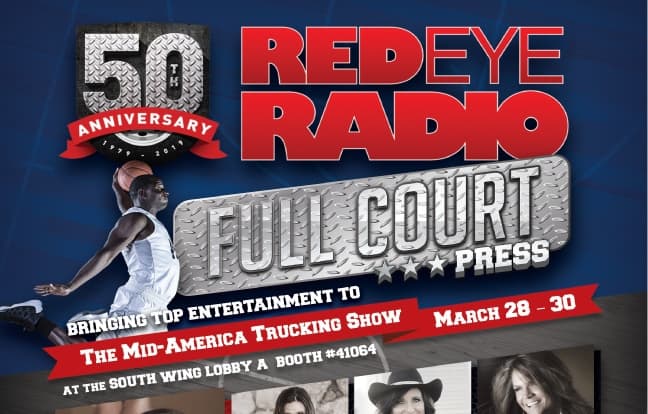 LOUISVILLE, Ky. — It will be a country music celebration as Westwood One’s Red Eye Radio network kicks the Mid-America Trucking Show up a notch.

Gretchen Wilson went overnight from talented obscurity to phenomenon. Her meteoric rise, the kind experienced by only a handful of artists in the past few decades, was that rare instance where talent and moment meet to form a cultural tidal wave. Her accolades include over 10 Million Albums sold worldwide, 11 major music awards (including a Grammy), and 10 top 10 hits. She will be at the Red Eye Radio Lobby Booth Thursday, March 28 for an autograph session where she will meet and greet MATS attendees.

In addition to Gretchen on site, her friends Jessie G and Bridgette Tatum will also be performing at the Red Eye Radio booth. Other performers include Jayne Denham, Dustin Collins, Olivia Ooms, Taylor Barker, and Tony Justice with a special guest appearance by Mountain Man from A&E’s Duck Dynasty.

Visitors to the booth will also be able to register for daily drawings for CB Radios, GPS Units, and much more.

The Mid-America Trucking Show, a trucking convention with over 70,000 attendees, will take place March 28-30 at the Kentucky Exposition Center in Louisville. Eric Harley, host of Red Eye Radio, will be on site to introduce attendees to the sizzling lineup of country music artists who will mix and mingle, take photos, sign autographs, and engage with drivers.

For 50 years, Red Eye Radio Network has been a part of the fabric of the trucking industry by consistently providing professional drivers up-to-the-minute news, information, and entertainment. The show is motivated by one purpose — to deliver a positive, in-cab experience by helping trucker drivers/owner operators and fleet owners stay informed, engaged, and entertained on the road or wherever they are in their daily lives.

With coverage across the United States and most of Canada, Red Eye Radio is hosted by radio veterans Harley and Gary McNamara. The program airs Monday through Sunday from 1 a.m.- 6 a.m. eastern time on more than 240 AM/FM stations, on-demand/podcasts, on Red Eye Radio’s free downloadable app from iTunes and the Google Play Store, Amazon’s Alexa, and Live Streaming.